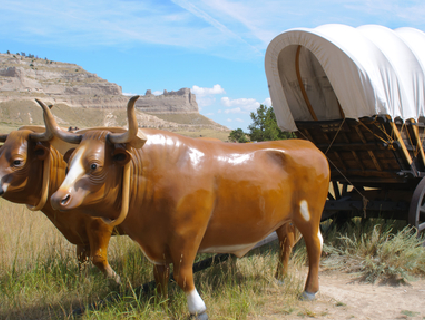 The first wagon trains left in January. There were just a few in the beginning, and they proceeded with caution, fording the San Joaquin River, navigating the canyons and switchbacks of the high Sierras, and traversing the salt flats and creosote scrub of the Great Basin before descending, at last, over the rocky peaks and into the the fertile loam of the southern plains. What they couldn’t carry with them—ocean-going yachts, car elevators, labradoodles—they’d simply discarded. Someday, maybe, when the time was right, they would return to the California they’d fled, to the Ocean-front estates and climate-controlled wine cellars they’d left behind. But for now, their sights were set on a new homeland where men, and sometimes even women, were free. Texas.

Or something like that, anyway. Earlier this week, Texas Gov. Rick Perry (R) ratcheted up his longstanding feud with California by purchasing radio ads in the Golden State urging businesses to pack up their things and come to Texas. “Building a business is tough, but I hear building a business in California is next to impossible,” Perry said. “I have a message for California businesses: Come check out Texas.” California Gov. Jerry Brown (D) responded as well as you might expect from someone who had just been trolled by Rick Perry. The ad was “barely a fart,” Brown said at a press conference, while working in a dig at “Lubbock, or whatever those places are that make up that state.”

And now the New York Times has entered the fray with the provocative headline, “Millionaires Consider Leaving California Over Taxes.” But the article mentions just one Californian, golfer Phil Mickelson, who has recently considered leaving over taxes, and Mickelson later apologized for even talking about the idea. There’s also this, from Stanford sociology professor Cristobal Young:

“I suspect the accountants are busier this year, but I don’t think the moving companies are getting a boost,” Mr. Young said. “Moving out of state is actually one of the most costly responses they could make. California’s high-income earners are clustered in coastal cities far from state borders. Moving to Nevada or Texas or Florida is a very big life change, and means leaving behind family, friends, colleagues and business connections.”

Reuters highlighted Young’s research in a similar piece last fall, concluding that tax hikes had no impact on where millionaires chose to live:

In fact, more millionaires came to the state than left after California’s so-called Millionaire’s Tax was introduced in 2005 – adding 1 percentage point of tax to incomes over $1 million. A 1996 cut to taxes for those earning $110,000 and up did not spur migration into the state, either.

The number of millionaires has risen or fallen by about 10,000 a year, but that change has been almost entirely due to the state economy, not wealthy people coming into or leaving the state. Such migration accounted for about 47 people, net, on average.

That’s because, high taxes notwithstanding, California still has many things going for it, including science classes that teach science, the ability to drink at a bar without being hauled off in handcuffs, and—this can’t be overstated—proximity to California.