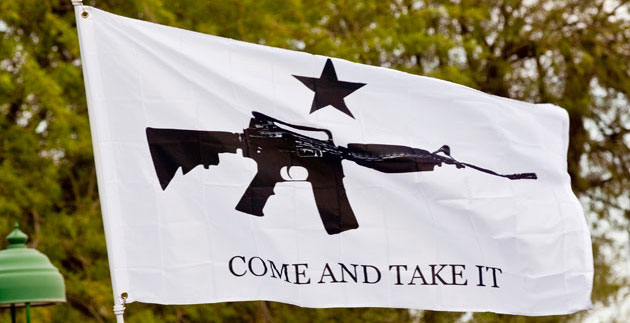 On Saturday, gun rights advocates will be organizing at least 121 rallies across the country in a “day of resistance” to President Obama’s gun violence prevention proposals. But some tea party activists are questioning the credentials of the group organizing the rallies, a Mesa, Arizona-based outfit called TheTeaParty.net that’s been criticized as a data-harvesting operation designed to vacuum up contact information and credit card numbers from unsuspecting and largely clueless conservative activists. They’ve complained that the group raises tons of money under the tea party name but doesn’t spend much to further the movement, and they’re skeptical of its move into the gun debate.

Robin Stublen, a Florida tea party activist and gun owner, is suspicious of the Day of Resistance event. “All my life I have been around guns of some sort,” he says. “Some are truly works of art. I respect them. I would never think of using them as the next political toy to make a fast buck. I seriously doubt if any of these so-called ‘leaders’ could tell the business end of a gun, let alone take them apart and clean them. They are opportunists and should be ignored.”

TheTeaPary.net was founded by Todd Cefaratti, an Arizona man who is the CEO of a “lead generation” company for the reverse-mortgage industry and who has inserted himself into tea party politics in recent years. In 2011, TheTeaParty.net sponsored a truck at NASCAR’s Camping World Truck Series, and it made a big splash by sponsoring a tea party “unity rally” at the Republican National Convention in Tampa, Florida, last year. It’s been a sponsor of the Conservative Political Action Conference in DC this year and last, raising its profile among conservative activists.

Originally called Stop This Insanity Inc., Cefaratti’s outfit has gone through a series of iterations and spinoffs, variously advertising under the name  JointheTeaParty.us, the Tea Party News Network, and recently, its leadership fund has been advertising on TV as Tea Party Demand, complete with an 800-number:

Now, it’s hosting the Day of Resistance website. And the group has had an ever-changing cast of characters associated with it, including Judson Phillips, the founder of the Tea Party Nation, who’s come under fire for making racist comments and for his efforts to make a buck off the movement by scoring an appearance by Sarah Palin at a for-profit tea party convention. Donna Wiesner Keene, the wife of NRA president David Keene, also worked briefly for the group.

Stop This Insanity is a nonprofit that ran into trouble with the Federal Elections Commission after setting up a “leadership fund” it hoped to use to get involved in political campaigns but failing to follow the right procedures for doing so. The group sued the FEC and lost the case last fall.

For years, tea party activists have complained that the group was ever so interested in collecting their personal information and their money, without spending much to support tea party political candidates. Activists griped that signing up with TheTeaParty.net would earn them nothing but spam from gold companies and other advertising. (In 2011, Roll Call reported that the group was indeed renting out its email list to gold companies and soliciting clients through NewsMax, the conservative news service, though a spokesperson says the group no longer works with NewsMax.)

A self-described “freedom organizer,” Cefaratti defended the group from criticism in a 2011 press release insisting it didn’t use the information gathered through fundraising and outreach for anything except furthering the tea party cause. His defense didn’t quell the criticism, possibly because tea party activists have seen this sort of thing before. Cefaratti is not the first person in the lead generation industry to gravitate to the tea party movement and create controversy for it. Mark Meckler, one of the founders of the competing Tea Party Patriots organization, also earned the wrath of grassroots activists who suspected that he was milking their mailing lists for an “affiliate marketing” company that sold email addresses of potential leads to distributors for the multilevel marketing company Herbalife. Meckler has since parted ways with Tea Party Patriots.

Last year, TheTeaParty.net created another leadership fund (similar to a political action committee) to make campaign contributions and independent expenditures in political races last year, raising nearly $1.2 million. Of that, it spent a paltry $52,000 donating to candidates and about $154,000 in independent expenditures, mostly to support the failed campaign of former Rep. Allen West in Florida. The rest of the money went mostly to fundraising and media.

The Day of Resistance was reportedly the brainchild of Dustin Stockman, whose father founded the Western Representation PAC and who logged some time on the Tea Party Express bus tours. (That PAC is most famous for helping tea party candidate Joe Miller knock off Sen. Lisa Murkowski in the 2010 Republican Senate primary in Alaska, though Murkowski went on to retain her seat as a write-in candidate.) Stockton is now TheTeaParty.net’s “chief strategist.”

Fundraising for the gun protests doesn’t seem to be going so well. The group made news last week when one of its fundraising emails noted that it had failed to reach its goal of raising $100,000 to support the nationwide rallies. “Last week we announced that we needed to raise $100,000 to market the Day of Resistance to make sure that there are HUGE crowds at all of these rallies,” Dustin Stockman wrote. “Unfortunately we remain well short of our goal. As of writing we have only raised $26,125.72 towards the $100,000 goal.”

Jennifer Burke, the social-media director for TheTeaParty.net, insists her group is a legitimate tea party operation that has a strong presence on Capitol Hill in DC. (Its lobbying group includes Nigel Innis, the conservative founder of the civil rights group CORE, and talk show host and former Arizona congressman J.D. Hayworth). “We’re very active and standing for the people and freedom,” Burke says. She notes that the Day of Resistance is gathering steam and close to meeting its fundraising goals. “I think this one’s going to be big,” she says confidently.