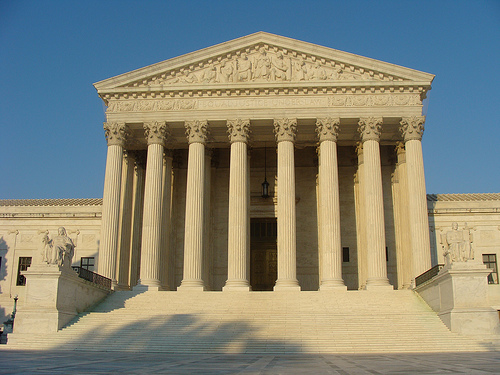 That whooshing sound you just heard was campaign finance reformers breathing a deep sigh of relief. On Monday morning, the Supreme Court declined to take up a lawsuit named Danielczyk v. United States, a challenge to one of the oldest laws in campaign politics: the ban on direct corporate contributions to candidates.

The case stems from donations that two Virginia businessmen, William Danielczyk and Eugene Biagi, made to Hillary Clinton’s 2008 presidential campaign. Danielczyk and Biagi gave to Clinton’s campaign under the impression that they would be reimbursed by the private equity firm that employed them. Instead Danielczyk and Biagi were prosecuted by the Department of Justice for violating the century-old ban on corporate contributions. They responded by fighting to dismiss the charges. Their attorneys argued that the Supreme Court’s logic in the Citizens United case—that independent expenditures do not corrupt or create the appearance of corruption—applied to donations directly to candidates. Thus the ban on corporate donations, they argued, was unconstitutional. In 2011, a federal district court agreed with Danielczyk’s lawyers and dismissed the charges, but the case was later reversed on appeal.

When Danielczyk reached the Supreme Court, supporters of tougher campaign finance laws feared that the court might go even further than Citizens United by demolishing the ban on direct corporate donations, one of the last remaining pillars of campaign finance law in US. They had reason to worry: Last week, the high court agreed to the hear the McCutcheon v. Federal Election Commission, another troublesome case in the eyes of the reformers. McCutcheon challenges the overall cap on what donors can give to candidates, parties, and political action committees, currently set at $46,200 to federal candidates and $70,800 to parties and PACs over a two-year election cycle. That limit is nearly 40 years old, dating back to the post-Watergate era, and if it falls, the reformers fear that future challenges to, say, the limit on donating to a candidate (now at $2,600 a year) could fall, too.

The Supreme Court could, sometime down the road, reconsider the corporate donation ban. But for now, the reformers have received a small bit of good news at an otherwise bleak point in the political money wars.