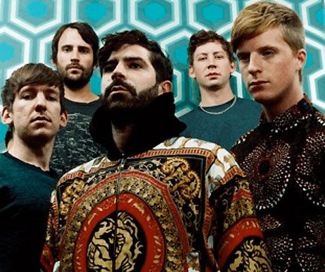 The British indie quintet Foals plays what’s commonly referred to as math rock: experimental, technically dazzling, rhythmically complex. The band made a name for itself in the UK with a couple of dazzling singles, and unlike most British buzzbands, successfully made the crossover to the US with Antidotes in 2008, followed by 2010’s Total Life Forever. (The title refers to Ray Kurzweil’s singularity concept; frontman Yannis Phillippakis is allegedly a futurist.) but Foals’ new album, Holy Fire, ?produced by Smashing Pumpkins producers Flood and Alan Moulder and out this week, suggests that the band has lost none of the taste for grandiosity that featured heavily on—and often detracted from—its previous albums. 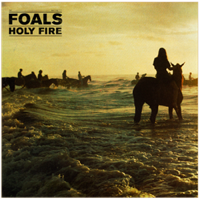 But energy and distinctive melodies are in short supply. On “Bad Habit,” Foals sentimental grandeur tips from stirring to smothering. The lethargic “Stepson,” aims for poignant, but lands on dull. The stripped down “Moon” works better, as far as the slow stuff goes, focusing simply on Philippakis’ plaintive voice against a chiming background. It all makes for an album that sounds good, but doesn’t particularly stick with you—potential glimmers consistently, but only occasionally shines through.

When it does, though, it blazes. The infectious, upbeat tune “My Number” is without a doubt the album’s best track, putting Foals’ virtues to use in service of a tightly plotted, crisply executed, irresistibly danceable pop song, complete with background “oohs,” a twinkling bridge, and perfectly devastating pop couplets: “You don’t have my number/And we don’t need each other now.” “Everytime” is another highlight, combining Phillippakis’ deep voice with a strong, dark bassline and driving beat in a song that sounds remarkably like a dance-funk version of Fleet Foxes. It’s hard not to feel that Foals is missing its true calling by sticking to proggy rock ballads and making records that sound, in the band’s words, “like the dream of an eagle dying,” when it might instead embrace its potential, and be a terrific indie-pop outfit.