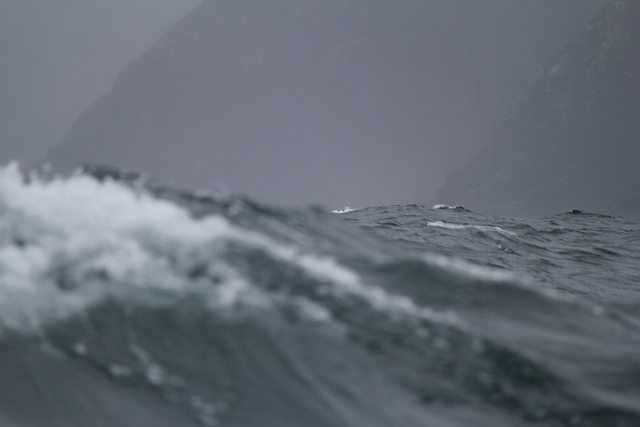 The ozone hole—the thinning of ozone in the lower stratosphere above Antarctica—has changed the way that waters in the Southern Ocean mix. And that has the potential to change how much CO2 the ocean sequesters from the atmosphere. Hence the course of global climate change. This according to a new paper in Science.

“This may sound entirely academic, but believe me, it’s not,” said lead author Darryn Waugh at Johns Hopkins’ Krieger School of Arts and Sciences. “This matters because the southern oceans play an important role in the uptake of heat and carbon dioxide, so any changes in southern ocean circulation have the potential to change the global climate.”

Map of local rates of sea level rise due to ocean heating below 4000m (colors and black numbers) for deep ocean basins. Also included is the rate from 1000-4000m warming (magenta) for the Southern Ocean (south of magenta line): via NOAA PMEL

The Southern Ocean has warmed at roughly twice the rate of the global mean ocean over the past few decades (even in its deep waters, map above), with some 40 percent of the anthropogenic carbon in the oceans entering south of 40°S. The authors write:

Southern ocean ventilation is driven primarily by the [prevailing] westerly winds, which have strengthened and shifted poleward over recent decades, primarily as a consequence of Antarctic stratospheric ozone depletion. Modeling studies suggest that this has caused changes in the ocean’s overturning circulation and carbon uptake. 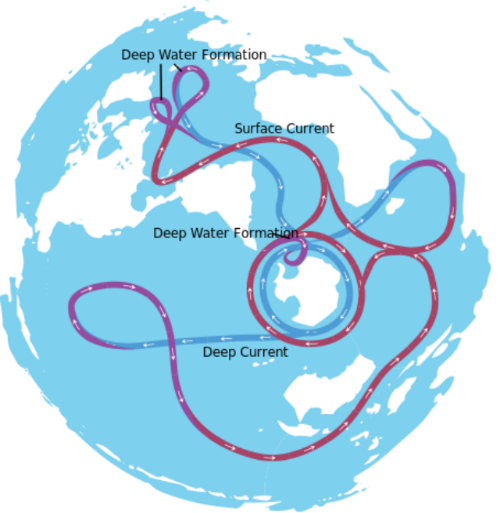 For the research reported in this paper, the authors used water samples collected in the Southern Ocean in the early 1990s and resampled again in the the middle and late 2000s. They measured chlorofluorocarbon-12, or CFC-12. That’s the ozone-killing stuff that was first produced commercially in the 1930s for use in aerosols, refrigerants, and air conditioners, and which grew rapidly in the atmosphere until the 1990s when it was phased out by the Montreal Protocol. It’s been useful to oceanographers ever since as a tracer for measuring water movements over time.

Comparing CFCs in the 1990s versus 2000s samples, the researchers were able to infer changes in how rapidly surface waters have mixed into the depths. They knew that concentrations of CFCs at the ocean surface increased in tandem with those in the atmosphere. So they were able to surmise that the higher the concentration of CFC-12 deeper in the ocean, the more recently those waters were at the surface.

What they found was younger than expected waters in the subtropics and older than expected waters further south. These findings correlate to observed intensification of surface westerly winds driven primarily by the Antarctic ozone hole. Which suggests that dwindling  ozone in the stratosphere is the primary cause of the observed changes in ocean circulation.

As stratospheric ozone recovers, the circulation may recover too. But there are other factors at work here. The authors conclude:

As stratospheric ozone recovers over the next 40 to 60 years, the recent trend of intensifying summer westerly winds may slow or reverse. However, continued increases in greenhouse gases will likely lead to strengthened westerlies during other seasons. The integrated impact of these trends in Southern Hemisphere westerlies on the ocean’s ventilation and uptake of heat and anthropogenic carbon is an open question.

We don’t hear so much about the ozone hole as we did in the 1990s. But that doesn’t mean it’s going away anytime soon. The video (above) by the American Museum of Natural History animates projections for a slow recovery. 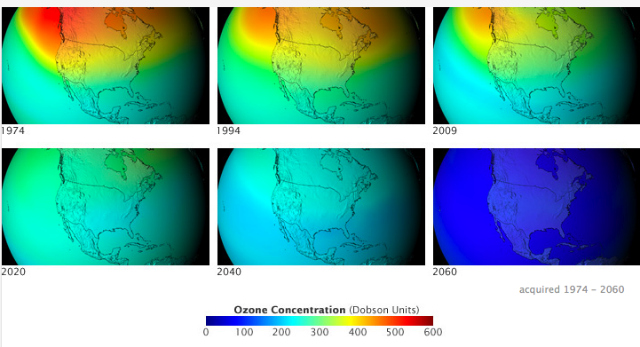 And this series of images (above) show projections of what might have become of global stratospheric ozone if we hadn’t curbed our emissions through the Montreal Protocol. Dark blue indicates zero ozone.