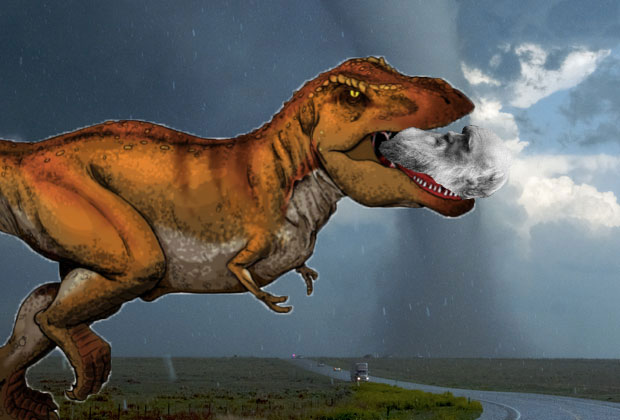 A T-Rex, Oklahoma, and the unfortunate fate of Charles Darwin. <a href="http://www.shutterstock.com/pic-81366340/stock-photo-tornado-and-large-hail-near-the-southeast-colorado-and-northwestern-oklahoma-border.html?src=csl_recent_image-1">Todd Shoemake</a>/ShutterStock and <a href="http://en.wikipedia.org/wiki/File:Tyrannosaurus_Rex_colored.png">WikiMedia Commons

UPDATE: On February 19, HB1674 passed through the Oklahoma Common Education committee on a 9-8 vote. On March 14, the bill died in the Oklahoma House of Representatives, according to the National Center for Science Education.

In biology class, public school students can’t generally argue that dinosaurs and people ran around Earth at the same time, at least not without risking a big fat F. But that could soon change for kids in Oklahoma: On Tuesday, the Oklahoma Common Education committee is expected to consider a House bill that would forbid teachers from penalizing students who turn in papers attempting to debunk almost universally accepted scientific theories such as biological evolution and anthropogenic (human-driven) climate change.

Gus Blackwell, the Republican state representative who introduced the bill, insists that his legislation has nothing to do with religion; it simply encourages scientific exploration. “I proposed this bill because there are teachers and students who may be afraid of going against what they see in their textbooks,” says Blackwell, who previously spent 20 years working for the Baptist General Convention of Oklahoma. “A student has the freedom to write a paper that points out that highly complex life may not be explained by chance mutations.”

These bills are “a kind of code for people who are opposed to teaching climate change and evolution.”

Stated another way, students could make untestable, faith-based claims in science classes without fear of receiving a poor mark.

HB 1674 is the latest in an ongoing series of “academic freedom” bills aimed at watering down the teaching of science on highly charged topics. Instead of requiring that teachers and textbooks include creationism—see the bill proposed by Missouri state Rep. Rick Brattin—HB 1674’s crafters say it merely encourages teachers and students to question, as the bill puts it, the “scientific strengths and scientific weaknesses” of topics that “cause controversy,” including “biological evolution, the chemical origins of life, global warming, and human cloning.”

Eric Meikle, education project director at the National Center for Science Education (NCSE) in Oakland, California, says Oklahoma has proposed more anti-evolution legislation than any other state, introducing eight bills with academic freedom language since 2004. (None has passed.) “The problem with these bills is that they’re so open-ended; it’s a kind of code for people who are opposed to teaching climate change and evolution,” Meikle says.

HB 1674 goes further than a companion bill under consideration in the state Senate by explicitly protecting students, teachers, and schools from being penalized for subscribing to alternative theories. It does, however, say that children may still be tested on widely accepted theories such as anthropogenic climate change. “Students can’t say because I don’t believe in this, I don’t want to learn it,” Blackwell says. “They have to learn it in order to look at the weaknesses.”

“An extremely high percentage of scientists will tell you that evolution doesn’t have scientific weaknesses,” says the NCSE’s Meikle. “If every teacher, parent, and school board can decide what to teach on their own, you’re going to have chaos. You can’t deluge kids with every theory that’s ever been considered since the beginning of time.”