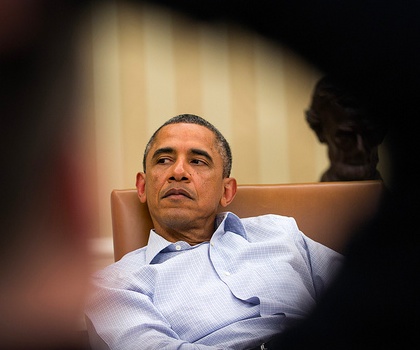 During his first term in office, President Barack Obama often pledged to honor American ‘values’—especially transparency—in the war on terror. During the first State Of The Union address of his second term, Obama returned to that theme, promising to “enlist our values” while killing suspected terrorists.

This time, Obama spoke of past accomplishments as well as future commitments, and responded, perhaps for the first time, to critics of the administration’s largely opaque targeted killing program:

[M]y Administration has worked tirelessly to forge a durable legal and policy framework to guide our counterterrorism operations. Throughout, we have kept Congress fully informed of our efforts. I recognize that in our democracy, no one should just take my word that we’re doing things the right way. So, in the months ahead, I will continue to engage with Congress to ensure not only that our targeting, detention, and prosecution of terrorists remains consistent with our laws and system of checks and balances, but that our efforts are even more transparent to the American people and to the world.

Obama is acknowledging critics who argue that his use of targeted killing has caused the deaths of innocent people—not just terrorists. It’s  likely the first time Obama has spoken of the necessity of “checks and balances” on the targeted killing program. But Obama’s definition of checks and balances probably doesn’t include a targeted killing court that would independently evaluate whether or not someone should be placed on a “kill list.” Instead, he may simply mean that he will tell certain members of Congress after he orders the deaths of suspected terrorists.

Obama’s past record, however, suggests that his promises of transparency will be unmet, and his promise to “continue to engage with Congress” implies that he believes his administration is already meeting most of its transparency obligations.

So far, Obama has disclosed few details of the targeted killing program to Congress, let alone to the public. Until last week, the Obama administration had never shared any of the Department of Justice legal memos justifying the use of targeted killing against American terror suspects abroad. Only recently did the congressional intelligence committees begin monthly visits to CIA headquarters to observe videos of targeted killing operations, and that only began at the insistence of Dianne Feinstein (D-Calif.), the chair of the Senate intelligence committee. As the American Civil Liberties Union’s Chris Anders told me last July, when Congress was considering compelling the administration to share the targeted killing memos with Congress, “The key committees of Congress don’t even know what the legal standard [for targeted killing] is or how they’re applying it. So how can they do meaningful oversight?”

Obama’s broader record on national security transparency is unimpressive. His administration has consistently invoked the state secrets doctrine to block judicial scrutiny of Bush-era abuses and national security practices. It has resisted legal efforts by civil libertarian groups to shed light on Obama administration policies such as targeted killing, calling them “secret” even when they are public knowledge. When it comes to the Freedom of Information Act, the Obama administration’s promises of transparency have gone unfulfilled.

A promise to be “even more” transparent from an administration that has been anything but has little meaning.