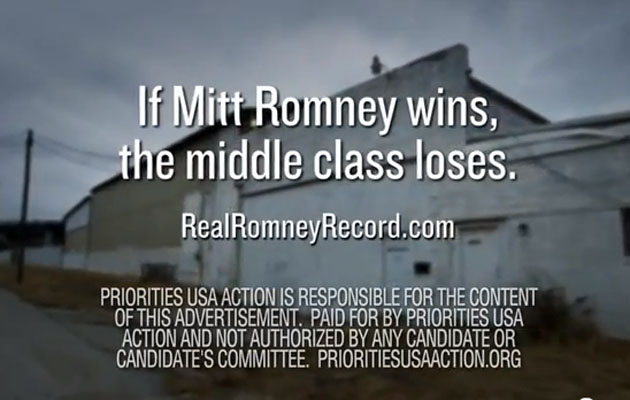 Priorities USA Action, the powerful pro-Obama super-PAC, unloaded $65 million in the 2012 presidential race, battering Republican Mitt Romney with attack ads that depicted him as a profit-chasing, cold-hearted plutocrat with a history of screwing over the middle class. Priorities was the counterexample to the Republican outside groups that spent hundreds of millions with little impact: Its ads were deemed hugely effective, and Priorities played a decisive part in Obama’s narrow victory in Ohio last November.

But Priorities isn’t shutting down now that Obama is safely ensconced for a second term. Instead, it will raise and spend big money to help the Democrats in the 2014 midterm elections and the 2016 presidential election, a Priorities fundraiser tells Mother Jones. The fundraiser says it is too early to comment on the group’s strategy for next year’s midterms or the upcoming presidential race, but he confirms that Priorities will remain a fixture in Democratic politics. The super-PAC currently has $3.4 million in the bank.

Priorities USA Action, the brainchild of Obama White House alums Bill Burton and Sean Sweeney, launched in April 2011 with a single goal: Reelect President Obama. Hollywood mogul Jeffrey Katzenberg and the Service Employees International Union seeded the super-PAC with $3 million in start-up funds. At the outset, Obama and his top allies distanced themselves from Priorities, refusing to bless the project or help raise money for it. This was no surprise: Obama had ripped the Citizens United decision in his 2010 State of the Union address and blasted super-PACs as “a threat to democracy.”

Priorities struggled in 2011 and early 2012 to raise significant amounts of money, while Karl Rove’s American Crossroads and the pro-Romney super-PAC Restore Our Future reeled in huge sums. (After one scathing story on Priorities struggles, Burton wrote to reporter Robert Draper: “If you didn’t read the story and just looked at the pictures…I feel like I came out pretty good.”) One exception was a $1 million check the comedian Bill Maher cut to Priorities.

But the super-PAC’s fortunes began to change in February 2012, when Obama reversed course and signaled to his donors that he wanted them to give to Priorities. Republicans ripped Obama for flip-flopping on super-PACs, but Obama’s campaign manager Jim Messina defended Obama’s decision by stressing that Democrats would be buried in outside money if they didn’t utilize super-PACs. “This decision will help fill a hole on our side,” Messina wrote in a message posted on the Obama campaign’s website titled “We Will Not Play by Two Sets of Rules.” Top Obama advisers, including Messina, David Axelrod, and David Plouffe, soon began appearing at Priorities fundraisers, giving the super-PAC the stamp of approval sought by many deep-pocketed Democratic donors.

Priorities’ fundraising improved with each month as Election Day neared—and it received a boost after it former White House chief of staff Rahm Emanuel joined its effort to corral big contributors in the final stretch of the campaign. After the election, Priorities could claim some of the credit for Obama’s win.

With Priorities and Organizing for Action, the nonprofit created out of Obama’s 2012 campaign to boost the president’s legislative agenda, Obama and the Democrats are building an impressive outside infrastructure. And Democrats’ embrace of super-PACs and outside money no longer appears reluctant, if it ever was: There are super-PACs raising and spending money to elect Democrats to the House and the Senate, and there are more and more single-candidate super-PACs springing up to elect specific Democratic candidates up and down the ballot.

Democrats may want political money reform, but for now, they’re all-in when it comes to big-money politics.