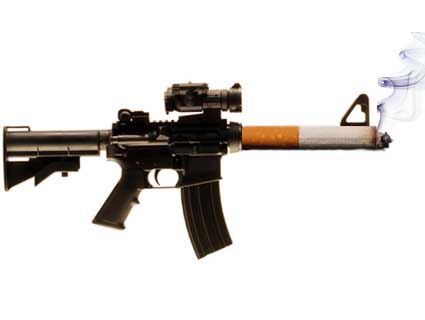 The National Rifle Association is worried that Kansas might try to discourage gun ownership. So it is throwing its weight behind a bill that would prevent the state from spending money lobbying against “any legal consumer product”—a category that includes, among other things, tobacco and junk food.

Although State Bill 45, debated yesterday by a state Senate committee, focuses on lobbying efforts at the state and local level, a broad interpretation of the language could prevent Kansas from spending anything on programs that discourage the use of harmful products. The bill could “scuttle public health campaigns and other proven public health programs,” the Topeka Capital-Journal reported yesterday, citing testimony from a Democratic senator and a representative from the American Cancer Society.

The NRA appears to favor this broad interpretation. “Other states allow taxpayer funds to finance expensive advertisement campaigns that demonize perfectly legal products—from everyday consumer products to firearms and ammunition,” reads the gun group’s website. “SB 45 would prohibit this practice in Kansas and make sure that public money is not used to put law-abiding gun owners in the crosshairs of an agency with a political agenda.”

State money could still be used to discourage underage drinking and smoking because those activities are illegal, an NRA spokesman told state senators yesterday. He added that the group’s “major concern” was the Kansas Department of Health and Environment, which has “put forth pamphlets and booklets providing for one-size-fits-all gun control measures.”

The NRA’s approach to science, politics, and public health has often drawn comparisons with the tobacco industry. In Kansas, at least, it’s a relationship that the gun lobby now appears to embrace.