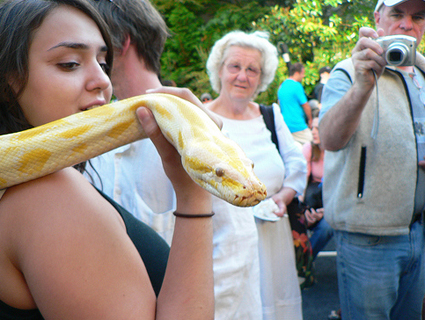 Officials in Florida wrapped up a month-long hunt for Burmese pythons on Sunday, and are pleased by the haul of their inaugural snake sweep. The Florida Fish & Wildlife Conservation Commission rounded up 50 pythons wandering the Everglades, the Miami Herald reports.

“You can argue it’s not a huge number,” Fish & Wildlife spokesman Jorge Pino told the paper, “but its 50 pythons not in the ecosystem causing havoc.”

As we’ve reported here before, giant, invasive snakes are creating significant problems in Florida—and not just because they might crash your pool party or explode after eating too much alligator. The snakes—which can grow to 18 feet long and weigh as much as 164 pounds—have been eating native rodents and birds, reproducing with abandon, and generally causing problems in an ecosystem where they do not belong. That’s why the state organized the hunt, complete with rules for how to kill pythons and a cash prize:

Hunters had to register with the wildlife commission, take a quick online course, and follow specific humane rules the commission determined were best fit to kill the Southeast Asian native monsters that can grow to close to 20 feet long. The pythons can be legally killed only by a gunshot to the head or by beheading with a machete.

Hunters have until 5 p.m. Monday to turn in what they have captured. They can keep the skins to do with as they wish. Prizes of up to $1,500 for the most pythons caught, and $1,000 for largest python captured, will be awarded at Zoo Miami on Saturday.

Scientists believe that the snakes initially entered the wild as abandoned exotic pets. This is what prompted the Obama administration to issue new rules last year barring the import of pythons and several other breeds of giant snakes. While pythons have been spotted in the wild elsewhere, Florida’s warm, tropical climate is a more viable habitat for them. But with the rest of the US getting ever-warmer, we might want to pay more attention to Florida’s python problem.