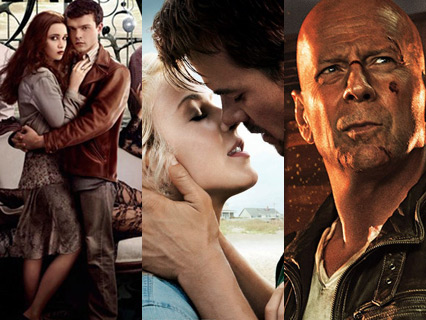 It’s Valentine’s/Presidents Day Weekend 2013, and your lover or spouse wants you to spend money on a night on the town. For some, that might involve a couple of hours together in a crowded air-conditioned chain movie theater, gorging yourself on pails of butter-slathered junk food.

If that’s your reality, here are the options, three of which were released on Valentine’s Day.

The first is Beautiful Creatures (Warner Brothers, 124 min.), a new romantic fantasy about a young human boy falling head over heels for a young female witch in rural South Carolina. (In the Beautiful Creatures universe, good witches prefer the more politically correct term “caster.”) The film is a irreverent and genuinely interesting entry into the ever-bloated “Teen-Human-Falls-In-Forbidden-Love-With-Teen-Supernatural-Being” subgenre, so comparisons to the über-profitable Twilight franchise are inevitable, and the studio’s ad campaign predictably tries to make Beautiful Creatures look like as much like Twilight as possible.

Such comparisons are bunk. Unlike any of the five movies in the Twilight saga, Beautiful Creatures is funny, sexy, and not a heaving pile of savage unbearability. And unlike any of the various Twilights, the cast here is uniformly excellent (Viola Davis, Emmy Rossum, Emma Thompson, Jeremy Irons, Zoey Deutch, and the two romantic leads Alden Ehrenreich and Alice Englert).

It’s more fitting to compare Beautiful Creatures to two other films also now in theaters. The newly released (and quite lovely) Warm Bodies—a romantic zombie comedy that includes the best use of Bruce Springsteen music in recent cinema—is essentially the same movie as Beautiful Creatures, if you swap the latter’s witches for zombies. Both films are human/non-human teen romances, are based on a novel, are helmed by a talented writer/director, have an Australian actress in the lead female role, and were released within a few weeks of each other. You could also appropriately compare Beautiful Creatures to the new 3D action flick Hansel and Gretel: Witch Hunters, seeing as how both films prominently feature a Bloodlusting Witch Hitler -type character (Emma Thompson plays the genocidal witch character in the former, Famke Janssen in the latter).

After Beautiful Creatures, your next option is the Valentine’s-timed Safe Haven (Relativity Media, 115 min.), a joyless romantic melodrama starring Julianne Hough and Josh Duhamel as the dour couple. Safe Haven is the latest film adaptation of a Nicholas Sparks book; the Nicholas Sparks Film Adaptation is a commodity that Hollywood apparently pumps out on a monthly basis. A review of a Nicholas Sparks movie is sufficient in length and content if you simply inform the reader that the movie is a Nicholas Sparks movie. Sparks, (not to be confused with the nineteenth century Ottawan timber magnate of the same name) is a robust, one-man puppy mill of bankable romance novels—bestsellers that get turned into movies with big budgets and top-billed actors. His novels and the resulting motion pictures are a full-tilt boogie of dime-store emotional manipulation.

To make things more disastrous, the plot twist toward the end of the film is—to put it mildly—infuriating. It’s as if M. Night Shyamalan briefly inhabited the body of Nicholas Sparks and decided to insult everyone’s intelligence. All this would be significantly less upsetting if Safe Haven weren’t the second Nicholas Sparks adaptation directed by Lasse Hallström, the Oscar-nominated Swedish filmmaker behind What’s Eating Gilbert Grape, The Hoax, Salmon Fishing in the Yemen, and The Cider House Rules.

So this would qualify as a step down for him:

Then there’s the new Die Hard:

A Good Day to Die Hard was preceded by 2007’s over-the-top, enjoyable Live Free or Die Hard, and will most likely be followed by sequels Die Hard Die Furious, Die, The Beloved Country, and Die Hard: All or Nothing. But this outing with John McClane—an adventure that explodes half of Moscow—isn’t that much fun. The vulgar wit and memorable set pieces present in past entries seem all but sapped dry. The film is partially redeemed by the quality of its inspired poster, which plays off of a classic Bruce Willis catchphrase: 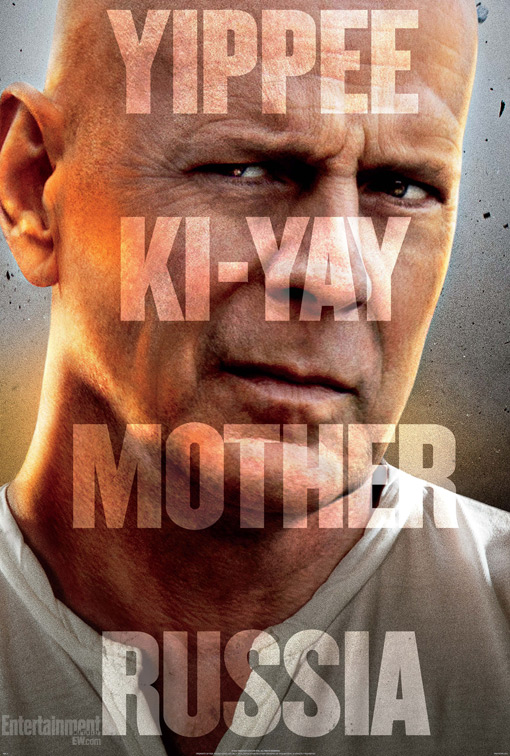 If the crap movie never existed, this beauty would’ve never seen the light of day. Via EW.com

Verdict: If you’re going for a romantic night out at the multiplex this weekend, skip Die Hard and stick with the zombies and the “casters.”