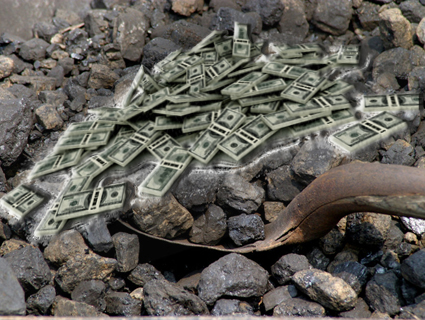 There’s a growing interest among enviros these days in combating climate change with direct offensives against the fossil fuel industry, sights locked on its bottom line. The idea is that while we scramble to invent more efficient light bulbs and throw up solar panels, we also chip away at the mountain of money that gives the industry its power, by turning shareholders on to the idea that unwise investments can make them accomplices in global warming.

Activist investment is nothing new, of course, the best-known case being the massive movement to divest from apartheid South Africa in the 1980s. But it’s gaining traction in the realm of climate change: Bill McKibben in particular has campaigned recently for colleges and universities to divest their endowments from fossil fuels, and Al Gore this month backed the efforts of Harvard students to do so.

Shareholders at a host of corporations nationwide—including Exxon Mobil, fracking giant Nabors, and, incongruously, Dunkin’ Donuts—have climate-related resolutions on the table this year that aim to require companies to account to shareholders on everything from mountaintop removal to greenhouse gas emissions to renewable energy use. This week, an unexpected institution became the first major bank to join their ranks and have its climate impact interrogated by shareholders. From the LA Times:

The resolution, which follows years of protests over banks financing certain coal operations, is to be included in proxy material being sent to shareholders of PNC Financial Services Group of Pittsburgh before the bank’s April 23 annual meeting.

It asks PNC to assess and report back to shareholders on how its lending results in greenhouse gas emissions that can alter the climate, posing financial risks for its corporate borrowers and risks to its own reputation.

PNC is the only major bank based in Appalachia, a region where coal and gas extraction is a major business. It has long lent to mining companies, including those engaged in mountaintop removal, which involves blowing up peaks to reach coal seams below and has been blamed for degrading landscapes, destroying habitat and polluting streams.

You might not expect a bank smack dab in the heart of coal country to have the most environmentally progressive shareholders, but then again PNC, heavily entwined with the coal industry but not as unbreakably massive as, say, Bank of America, could be fertile ground for climate leadership. The bank has in recent years tried to give itself a green makeover, but apparently not enough to satisfy the shareholders behind the resolution, including a Roman Catholic group and Walden Asset Management. The case PNC ultimately makes to its investors should be an interesting study in the practical power of wielding shares as a weapon against climate change.