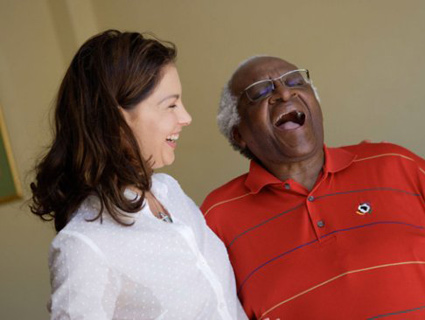 Actress and public health activist Ashley Judd is seriously considering running for Senate as a Democrat next year against Sen. Mitch McConnell (R-Ky.), the Senate minority leader. On Tuesday, the Daily Caller’s Alex Pappas waded through Judd’s essays and speeches to make the case that she just might be the Democratic Todd Akin—someone whose “comments are so outrageous and extreme that people can’t bring themselves to vote for her.”

This is a sentiment that is shared by, among others, Ashley Judd. “I am asked a lot if I will someday run for office, often enough, in fact, that if I had a nickel for each time I’ve been asked, I could fund a campaign,” she said in a 2006 speech at the University of Kentucky. “But a speech like this, such an unguarded chunk of my truth is very likely to completely disqualify me.”

The subject of that particular speech, and one she’s returned to quite often since, was feminism—what she considered to be the animating ideal behind her political life. “I’d like to propose that the society in which we live is, in fact, extremist and radical,” she said. “It is so skewed, massively out of balance; the result of one sex ruling and objectifying another for at least the last millennia.” The world’s religions were filled with “stunning misogyny,” Christianity included.

Among other incriminating quotes Pappas flags, Judd compared mountaintop-removal coal mining to the Rwandan genocide. (She added, “Naturally, I accept that I set myself up for ridicule for using such strong terms, or perhaps outrage from human victims of slaughter, but I do believe in the profound interconnectedness of all life, and, I agree with Einstein’s assertion that ‘you cannot pick a flower that you do not disturb a star.'”)

I’ve spent only a few days in Kentucky, so I’ll accept the premise that most of the state’s eligible voters don’t spend much time quoting Gloria Steinem and railing against the patriarchy. I’ll also accept Pappas’—and Judd’s—premise that she is substantially more liberal than the median Kentucky voter, given that the median Kentucky voter recently voted for Rand Paul. It’s not clear whether she’s running; it’s certainly not clear that she’d be a favorite to win.

But the Akin comparison seems to miss the whole point of Todd Akin—and Ashley Judd, too. The Missouri Senate candidate’s demise hinged almost entirely on his flip suggestion that some kinds of rape (i.e. non-“legitimate” rape) really weren’t so bad, as well as a basic ignorance of science; Judd’s most incriminating statements stem in no small part from the fact that, yes, actually, women have been held down for a while and still face serious obstacles today. (Case in point: Todd Akin.) In Kentucky, that might be a losing proposition, but there’s nothing “bizarre” about feminism.

“It is my pleasure to make you slightly uncomfortable,” Judd told her audience at UK, halfway through her feminist manifesto. For Judd, that’s a feature, not a bug.