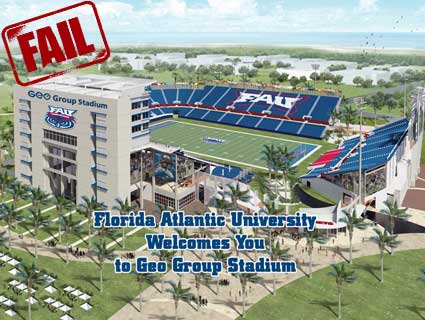 This ill-conceived branding exercise got us to wondering: What are the other worst-named corporate-shilling sports venues?

1. Enron Field, Houston Astros
How bad was it to be associated with Ken Lay and Co.? As one team executive told reporters before Enron Field became Minute Maid Park, “The Houston Astros have been materially and adversely affected by the negative public perception and media scrutiny resulting from Enron’s alleged bad business practices and bankruptcy.” Well, that and the fact that they stopped wearing these.

2. Citi Field, New York Mets
Timing is everything, right? So don’t sell the rights to your new ball field to a bank that just took $45 billion in bailouts from the federal government. (Even at $20 million a year for 20 years.) Because you’re basically handing the headlines over to the New York tabloids: TARP FIELD! BAILOUT PARK!

6. Hunky Dorys Park, Drogheda United
Hunky Dorys is a brand of potato chips, and Hunky Dorys Park is where the Irish city of Drogheda’s soccer team plays. This is sort of like naming a venue after, say, Whataburger. Wait…

8 and 9. Papa John’s Cardinal Stadium and KFC Yum! Center, University of Louisville
Not content to have sold its football naming rights to this guy, Louisville went back to the well and named its by-all-accounts beautiful basketball arena for a company that produces the Supremo P’Zone Pizza and the Doritos Locos Taco Supreme.