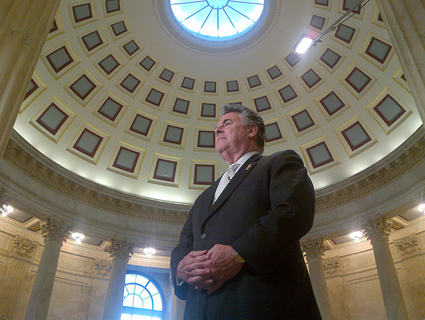 On Wednesday, Rep. Peter King lost it. Infuriated by a last-minute decision by House speaker John Boehner to kill a disaster relief package for victims of Hurricane Sandy, the New York Republican spent the last day of the 112th Congress mulling the moral decline of the GOP. “I can’t imagine that type of indifference, that type of disregard, that cavalier attitude being shown to any other part of the country,” he said in a floor speech. In King’s telling, Boehner’s decision was a “a cruel knife in the back.” Later in the day, New Jersey Republican Gov. Chris Christie also wondered what had come of his party, calling the decision “callous” and “disgusting,” and adding: “This used to be something that was not political.”

But King and Christie shouldn’t be surprised. Boehner’s stonewalling on disaster relief, far from a clean break with tradition, has become characteristic of how the currently deficit-obsessed GOP does business. Here’s a refresher:

The disaster: Hurricane Katrina
The fallout: Within 10 days of the storm hitting New Orleans in 2005, Congress votes on a fast-tracked bill allocating $51.5 billion in relief, including $11.5 billion in block grants to Louisiana and Mississippi, and billions for levees, roads, bridges, and schools. Eleven House Republicans, including New Jersey Rep. Scott Garrett, vote against the bill, citing concerns about oversight and largess. Rep. Steve King (R-Iowa) calls his “nay” vote the best vote he ever cast. A subsequent push to allocate funds for repairs to the I-10 bridge across Lake Pontchartrain comes undone when Sen. Ted Stevens (R-Alaska) threatens to resign if his $453 million earmark for two rural bridges is not included. (Stevens justifies his opposition in part by noting that in Alaska, when a town is crippled by a natural disaster, they simply relocate.)

The disaster: Hurricane Ike
The fallout: In 2010, Sen. John Cornyn (R-Texas) introduces legislation to extend a deadline for state officials to spend disaster relief funds in Gulf Coast communities. Delays in the appropriation process had meant that some agencies only had a few months to spend money that had been nominally available for two years. The House Republican leadership determines that Texas is dragging its feet and kills the bill—which simply extends the deadline and makes new expentidures—in committee.

The disaster: 9/11
The fallout: Congress ultimately approves $4.2 billion to cover medical expenses and provide compensation for first responders and cleanup crews suffering from the effects of inhaling toxic particles at Ground Zero. Republicans block it for a year, before finally approving it during the lame duck session in 2010. Rep. Lamar Smith (R-Texas) typified his caucus’ critique: “This legislation as written creates a huge $8.4 billion slush fund paid by taxpayers that is open to abuse, fraud and waste.” Rep. Paul Ryan (R-Wis.), meanwhile, warned that it “would create a new health care entitlement.” Reps. Scott Garrett (R-N.J.) and Chris Lee (R-N.Y.) are the only two members of the New York–New Jersey delegation to oppose the measure. Although quick to blame Democrats for obstructing the bill’s progress, Peter King acknowledges his own party’s intransigence in an interview on MSNBC: “I have said throughout this, going back to five years ago, we would be lucky to get 24, 25 Republican votes. This is not supported by the Republican Party. I have broken with the party on this.”

The disaster: Hurricane Irene, Tropical Storm Lee, Mississippi River flooding, Texas wildfires, and the Joplin tornado.
The fallout: When cash-strapped FEMA runs low on funds to pay for Hurricane Irene in 2011, it redirects funds that were originally meant to go to Joplin, which had been flattened by a tornado three months earlier. The Senate proposed $7 billion to refill FEMA’s coffers; the House aims to keep it to $3.7 billion. Republicans filibuster the bill in the Senate. It subsequently passes the Senate but dies in the House, which never voted on the Senate version. Foreshadowing what would happen one year later with Hurricane Sandy aid, New Jersey Republican Reps. Chris Smith and Rodney Frelinghuysen both pressure Boehner to approve the funding. (Update: Congress eventually approved the $7 billion package and President Obama signed it into law that December.)