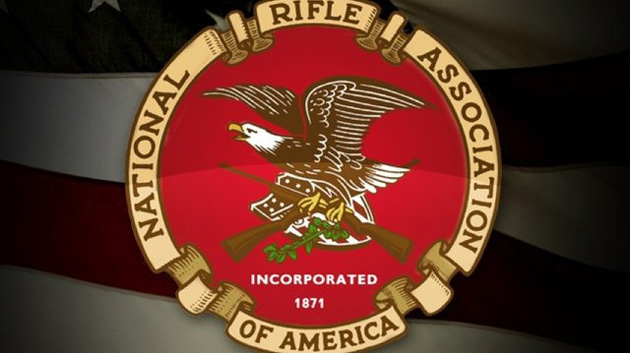 The resurgent debate over gun control has put a spotlight on the hardline leaders of the National Rifle Association. In the wake of the massacre in Newtown, Connecticut, executive vice president Wayne LaPierre delivered a full-throated rejection of gun control and called for more firearms in schools, while David Keene, the group’s president, predicted the failure of any new assault weapons ban introduced in Congress. The two NRA figureheads purported to speak for more than 4 million American gun owners, though the group’s membership may in fact be smaller.

But whatever its true size, today’s NRA, widely considered to be disproportionately influential in politics, operates more like a corporation or politburo than a typical nonprofit or lobbying organization. Its 76 board directors and 10 executive officers keep a grip on power through elections in which ordinary grassroots members appear to have little say.

The NRA leadership is known as much for its organizational secrecy as its absolutist interpretation of the Second Amendment. That may be why, until now, little has been known about some of its most powerful insiders. They sit on the NRA board of directors’ nine-member Nominating Committee, which, despite ballots distributed annually to legions of NRA members, closely controls who can be elected to the NRA board. Mother Jones has uncovered key details about the current Nominating Committee*:

Long before Newtown, and even before the bloodbath at a movie theater in Aurora, Colorado, a survey conducted in May 2012 by Republican pollster Frank Luntz found that most gun owners, including current and former members of the NRA, favor tighter gun regulations such as universal criminal background checks. And according to an ABC/Washington Post poll published on Tuesday, 86 percent of gun-owning households support a law requiring background checks at gun shows to close the so-called “loophole.” So what motivates NRA leaders to remain so out of step with their constituency, flatly rejecting any discussion of legal reform?

One answer may be their ties to the $11.7 billion gun industry. Freedom Group’s Kollitides ran for the NRA board in 2009 but lost, despite an endorsement from gun manufacturer Remington. “His campaign didn’t sit well with some gun bloggers, who viewed him as an industry interloper,” according to a 2011 report in the New York Times. 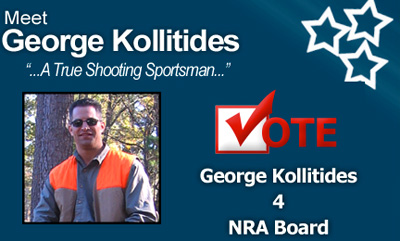 From George Kollitides’ 2009 campaign for the NRA board.

It remains unclear who among the NRA leadership tapped Kollitides, Bain, and Smith, to be on the current Nominating Committee.

“I was appointed,” Bain confirmed in a brief phone call. “I am not a board member,” he said, declining to say who appointed him. “This conversation is over.”

Calls to Kollitides and Smith seeking comment were not returned. The NRA declined to respond to multiple requests for comment regarding its board members and other organizational details. However, one NRA official, who declined to be named, said that Kollitides “has never been on the board, although he has run several times.”

But that need not stand in the way. “You’ve got a good friend you want to get more involved, and you nominate him,” a current long-serving NRA board member told Mother Jones.

Back in August 2011, the NRA Nominating Committee elected Clark, a board member since 1999, as its chair. Clark, a competitive sport shooter and an instructor in the Eddie Eagle GunSafe program heralded by LaPierre in his recent media blitz, is a longtime resident of Newtown. Her home is about a 10-minute drive by car from Sandy Hook Elementary School and about a 15-minute drive from the former home of Nancy Lanza, who was also murdered by her son on December 14 after he got possession of her semi-automatic assault rifle and other legally registered weapons.

Reached by phone on December 29 in nearby Bridgeport, Connecticut, where she works in the health care industry, Clark confirmed her NRA leadership role. When asked if she knew any of the victims or their families in Newtown, she replied, “This is a hard time for me. I am not really interested in giving an interview at this time.”

Unlike the NRA’s paid executive officers, who earn big money for their work, Clark’s directorship is unpaid. (LaPierre took home $960,000 from the NRA and related organizations in 2010; Kayne B. Robinson, the executive director of general operations, earned more than $1 million.)

Elections for the NRA board, which oversees the organization’s nearly 800 employees and more than $200 million in annual revenues, occur annually for 25 directors, who serve three-year terms. The vote typically involves less than 7 percent of NRA members, according to past NRA ballot results and pro-NRA bloggers. A low election turnout among members is not uncommon among nonprofit groups, but how a candidate gets his or her name on the ballot is key. According to an NRA supporter and self-proclaimed Second Amendment activist in Pennsylvania who blogs under the handle “Sebastian,” this occurs one of two ways: It requires a grassroots petition by members, which rarely gets a candidate on the ballot, or a candidate must be included on the official slate endorsed by the Nominating Committee.

“Read the bios in your ballot and you’ll see that almost all were nominated by the nominating committee,” complained “Pecos Bill” from Illinois last January in one pro-gun-rights forum. “Seems the NRA, fine organization that it is, is being run like a modern corporation and the ‘good ol’ boys’ are keeping themselves in power.”

In fact, 10 women currently serve on the board, but few people had access to that information until very recently, when the NRA posted a complete list on its website. (In the past, the NRA cloaked its board in secrecy; incomplete and outdated lists were published by outside groups using press clips and legally required NRA financial disclosures.) According to a search using Archive.org, the current board page was published sometime after December 6. 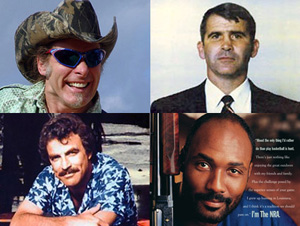 The Nominating Committee now led by Clark handpicked nearly all of the candidates on the 2012 ballot. As John Richardson, an NRA “Life Member” in North Carolina explained on his blog, No Lawyers – Only Guns and Money, in January 2012, “This year there are 31 candidates running for 25 positions. Of these 31, 29 were nominated by the Nominating Committee. The remaining two candidates were nominated by a petition of the membership which requires at least 250 signatures.” (One of those two nominated by petition was elected to the board last year.)

At a poignant news conference held in Newtown on Monday, parents of some of the slain first-graders announced Sandy Hook Promise, a new group and campaign to promote “common sense solutions” to America’s gun violence problem. It is unclear whether Patricia A. Clark attended that gathering in her local community. But she has shown a certain kind of interest in kids for decades. According to her board bio, she has “worked with Juniors for more than 30 years” as a firearms coach and instructor. As a line in her bio puts it, she is an “NRA Benefactor and Heritage Society member who believes that youngsters are the key to NRA’s future.”