Surely, one of the more depressing ledes to run this week: 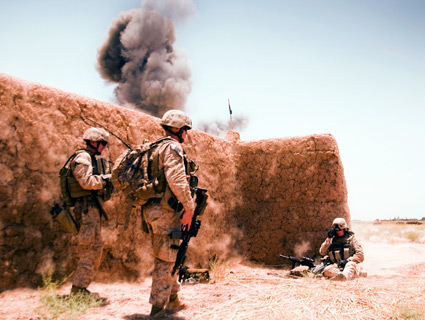 Suicides in the U.S. military surged to a record 349 last year, far exceeding American combat deaths in Afghanistan, and some private experts are predicting the dark trend will worsen this year.

The figures are tentative, pending the completion of full reports on each case later this year. The number of US military suicides surpassed the number of combat deaths for the third time in four years. (For 2012, the Associated Press recorded 295 American combat deaths in Afghanistan.) The previous record high was 310 suicides in 2009, after the rate began a disturbing upward trend starting in 2006.

A breakdown of the suicides among active-duty troops last year by service:

According to the numbers released by the Pentagon, the suicide rate among active-duty military is still below that of the civilian population.

Here’s the AP rundown of the Pentagon’s analysis of military suicides in 2011:

Each year the Pentagon performs an in-depth study of the circumstances of each suicide. The most recent year for which that analysis is available is 2011, and among the findings was that those who took their own lives tended to be white men under the age of 25, in the junior enlisted ranks, with less than a college education.

The analysis of 2011’s 301 military suicides also found that the suicide rate for divorced service members was 55 percent higher than for those who were married. It determined that 60 percent of military suicides were committed with the use of firearms – and in most cases the guns were personal weapons, not military-issued.

In 2009, the Army began developing required surveys for all new and current soldiers. The goal of the survey was to determine causes of the uptick in military suicides, and to learn how best to prevent suicides. The panel that developed the survey also launched the largest study of its kind: a $50 million, five-year study run by Army and the National Institutes of Mental Health. Professors from Harvard, the University of Michigan, and Columbia also sat on the panel of experts. A whole host of other studies—both private and backed by the government—are examining causes and prevention for military suicides. For instance, late last year, the Department of Defense announced a three-year, $10 million study, conducted at the Medical University of South Carolina, that tests whether fatty acids in fish oils can help cure the anxiety suffered by combat veterans, thus hopefully reducing the rising suicide rate.