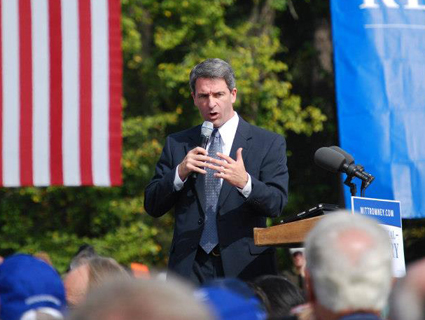 Pressed at Saturday’s National Review Institute Summit on how best to fight back against President Obama’s gun control campaign, Virginia attorney general Ken Cuccinelli didn’t blink. While he was quick to criticize the President’s approach, there was “an awful lot we can do to make Virginia Techs and Sandy Hooks less likely.” Then Cuccinelli—who recently declared his candidacy for governor—pivoted to mental health. “I’m as frugal a participant in government as you can find,” Cuccinelli said. “But I believe government has a role in helping people who through no fault of their own” suffer from mental illness.

So what did Cuccinelli, who described himself in his remarks (and on his gubernatorial campaign website) as a leader on mental health isssues, think of President Obama’s own post-Newtown proposals to improve mental health treatment? “I haven’t seen them,” he told me after the panel. (They’re here.)

That’s surprising, given his stated commitment to the issue. It’s also a bummer, because—as with many of his conservative colleagues, including the NRA’s Wayne LaPierre—Cuccinelli’s warnings about gun-grabbing mask the fact that he broadly shares Obama’s priorities on a key aspect of the gun-control package.

“There probably is a decent amount of common ground,” said Mira Signer, executive director of the Virginia chapter of National Alliance on Mental Illness, who has tracked Cuccinelli’s career closely. “I don’t think that there’s total alignment or even partial alignment, because a lot of what the president is calling for in terms of the mental health aspects of the plan is early intervention, more robust workforce, training, more services.” But Cucccinelli, she says, has made it clear that “he understands that those things are important.”

In Virginia, Cuccinelli has walked the walk—at least in part. Signer praised Cuccinelli as one of the few lawmakers in either party to make mental health a priority in the state. As a state senator and again as attorney general, he worked to modernize the state’s sorting system and improve outpatient treatment. “It was good to have somebody like him who was in such a high position,” Signer said.

But there was a caveat. Even as Cuccinelli worked to update the state’s system, he’s spent much of his time in Richmond working to tear it apart. “We would sort of juxtapose all of that particularly against his opposition to the Affordable Care Act, which in Virginia is something that can really significantly benefit people with mental illness, particularly with Medicaid* expansion,” Signer said. ACA mandated that health insurance plans include coverage for mental illness—and (you may have heard) mandated that everyone who could afford it purchase said health insurance.

Given his courtroom fumbling of a challenge to ACA, perhaps the best thing Cuccinelli ever did for mental health in Virginia was being a bad lawyer.

*Correction: This post originally referred to the federal program in question as Medicare.