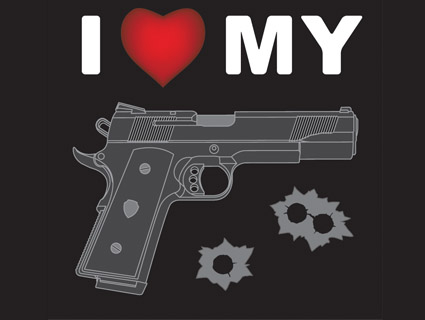 On Saturday, January 19, an alliance of pro-gun groups is commemorating the very first Gun Appreciation Day, encouraging Americans to head to their local gun shows, stores, and ranges to prove their support for the 2nd Amendment. The fake holiday is a call to arms to conservative gun owners as well as a direct rebuff to President Obama’s push for gun legislation in the wake of mass shootings like the one at Sandy Hook Elementary. “Scheduled to send a message to Washington two days before Obama’s second inauguration, the ‘Gun Appreciation Day’ is expected to rival ‘Chick-fil-A Day‘ as a public statement of protest against government policies,” a blast email from the organizers reads.

Some of the organizations promoting Gun Appreciation Day are so extreme that even the NRA won’t go near them. (One of the now-disavowed official sponsors was a hardcore white nationalist political party.) These groups are smaller, far less powerful, and do not enjoy anything close to the NRA’s hundreds of millions of dollars in annual fundraising. Here’s a look at five groups that are hyping up the occasion—and two more of their ilk: 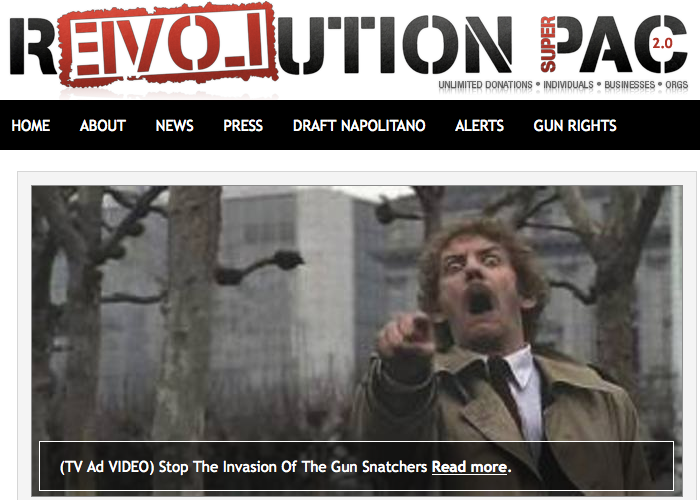 This super-PAC—run by Lawrence Hunter, a Forbes columnist and ex-adviser to the Reagan White House—was influenced by the tea party and libertarian fixture Rep. Ron Paul. Pet causes include raging against antidepressants as deadly and dangerous and equating the president to Hitler and other dictators: 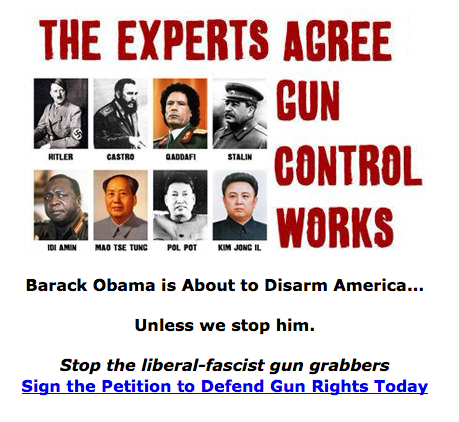 Founded by conservative author Alan Gottlieb in 1974, the Second Amendment Foundation is the country’s oldest legal-action group focusing on gun rights. It claims about 650,000 members. It is known for its flurry of federal lawsuits, including a pair filed in conjunction with the NRA. The foundation also runs a series of magazines, including Women & Guns: 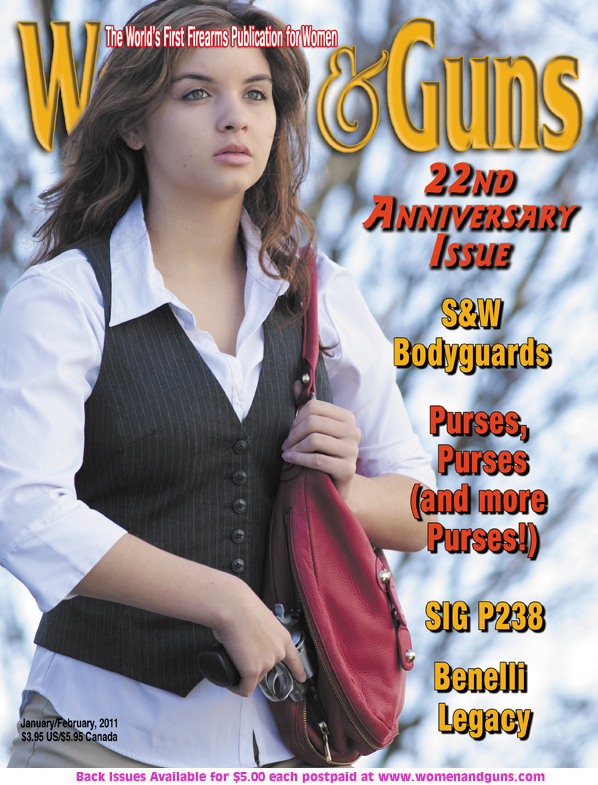 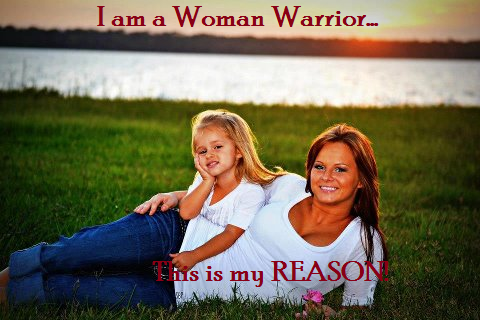 Speaking of women and guns: Women Warriors PAC was formed during the past election season to support “strong Conservative Women fighting the Obama political machine’s ‘war on women’ message”—women like Mia Love. (It emphasizes that its members are “warriors not helpless minions!”) The PAC only has a few hundred dollars on hand, but what it lacks in funds and publicity, it makes up for in enthusiasm:

Is it me or does Obama look very effeminate compared to @mittromney at the #Debate? #TCOT #TLOT

Citizens Committee for the Right to Keep and Bear Arms

Alan Gottlieb also serves as chairman for this nonprofit that started in 1971. Its tax forms show that it rakes in less than $70,000 annually. However, it does have this bit of gun-enthusiast cred: CCRKBA is credited as having coined this wildly popular slogan:

JEWS FOR THE PRESERVATION OF FIREARMS OWNerSHIP

Unlike the previous four, this group isn’t listed as an official Gun Appreciation Day sponsor. But that hasn’t stopped them from cheerleading for the event.

This Wisconsin-based organization was founded in the late ’80s by ex-arms dealer Aaron Zelman. Over the decades, Jews for the Preservation of Firearms Ownership has made some high-profile friends, including musician and anti-Obama gun-toting zealot Ted Nugent (whom Zelman praised for his “talent, success, wit, and celebrity“). The group has criticized the NRA for its incessant “kowtowing to authoritarian police bureaucrats.”

Perhaps more than any other group, JPFO likes to push the idea that gun control always leads to totalitarianism and/or genocide: It’s known for selling posters and bumper stickers tying Nazism to gun laws. Zelman even wrote a book in the ’90s that supposedly contains “startling evidence that the Gun Control Act of 1968 was lifted, almost in its entirety, from Nazi legislation”: 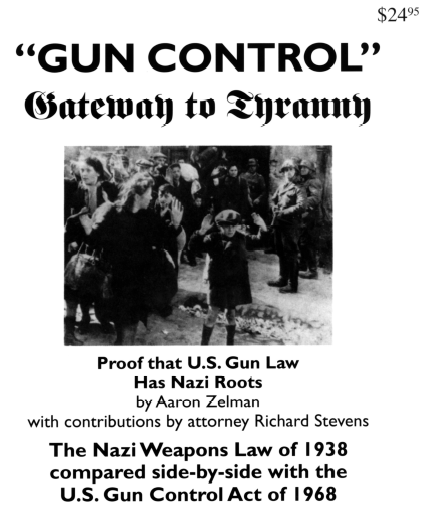 In the days following the Newtown massacre, JPFO started repromoting its comic book, “Gun Control” Kills Kids!, which features a delightful fear-mongering character named Gran’pa Jack. The comic “immunizes kids against anti-gun propaganda and it provides long-term insurance for your right to be armed,” according to its website.

And here’s a 2010 documentary by JPFO that spends 40 minutes (you guessed it!) invoking the Holocaust, attacking Sen. Dianne Feinstein, and asking the question, “WHY DO SO MANY JEWS SUPPORT GUN CONTROL?”

If you would like to peruse their “‘Gun Control’ Genocide Chart,” click here and have a ball.

This group was founded in the late ’70s by H.L. Richardson, who was also a member of the NRA board of directors. Since then, GOA has built up a membership of more than 300,000 and its leadership routinely lambastes the NRA for being cowards who cave too much to the Democrats.

The group took in about $2 million in 2010, but during the 2012 election, it put its cash behind conservative House and Senate candidates like Denny Rehberg and Richard Mourdock. Last July, GOA executive director Larry Pratt promoted the theory that the Dark Knight Rises theater shooting in Aurora, Colorado—which left 12 people dead and 58 wounded—was merely part of a plot to boost public support for a tyrannical UN arms treaty and wholesale confiscation of American firearms. More recently, Pratt has been making the rounds on talk shows in the immediate aftermath of the Sandy Hook shooting.

It’s worth mentioning that GOA and Pratt are on Twitter:

Diff between a gun control zealot and a 1 y.o? 1 y.o doesn’t whine & cry as much & his poop doesn’t come out his mouthwp.me/2DDPt

The National Association for Gun Rights, a nonprofit founded in 2000, is lead by Dudley Brown, a 47-year-old Republican lobbyist (below). And like Gun Owners of America, NAGR likes to paint the NRA as a bunch of complacent wusses. 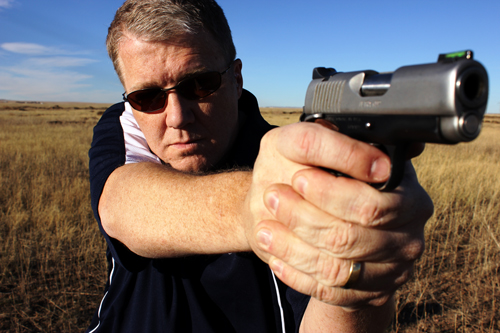 The group’s revenues are about $4 million, and it claims to have “hundreds of thousands” gun enthusiasts paying membership dues. NAGR has made news for doing things like pushing a lawsuit challenging the US Postal Service’s ban on firearms in post offices, and for fervently opposing reauthorization of the Patriot Act due to provisions allowing “un-Constitutional” gun searches.

NAGR’s front-and-center issue is crusading against the UN Small Arms Treaty, which would allegedly strip all American citizens of their 2nd Amendment rights. (Just for the record, the Small Arms Treaty does not actually exist.) Its passionate struggle against this nonexistent treaty has earned it friends like tea-party darling Sen. Rand Paul (who blasts out emails for them), and veteran political analyst Chuck Norris.

Here’s a video of Dudley Brown in December 2011 trashing then presidential candidate Newt Gingrich for his “well-known” anti-gun record: