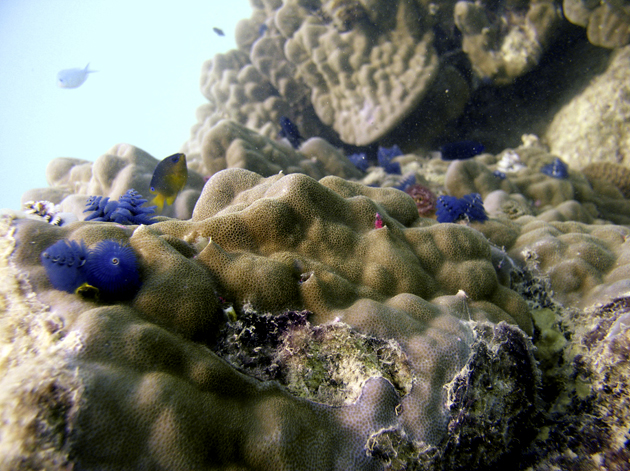 Coral reefs already have a lot on their plate: ocean acidification and warming, damage by extreme storms, water pollution from industrial runoff, even crazy invasive starfish. Now, it seems, the big momma of all reefs, Australia’s Great Barrier Reef, is also under siege by fossil fuel development being pushed by the recently elected conservative Queensland state government. The risk is great enough that UNESCO has threatened to strip the reef of its World Heritage Site status this year, if not more is done to protect it.

“It would be an international shame for Australia and send a shocking message that even the wealthiest nations can’t manage their reefs,” Felicity Wishart, director of Fight for the Reef, said. The campaign is a newly-formed coaltion between the World Wildlife Fund and the Australian Marine Conservation Society to pressure the state and federal governments to curb industrial development near the reef.

Wishart said a suite of more than 60 proposed industrial facilities, mostly to facilitate coal exports, are being considered for the Queensland coast, off of which the reef is located. If built, she said, they would nearly double the amount of ship traffic over the reef, posing the risk of physical collisions and oil spills, and necessitate dredging the ocean floor nearby, adding to sediment contamination that can block the sunlight the corals need to thrive.

Last year UNESCO decided the threats were enough to warrant dispatching a team to investigate; it drafted a series of recommendations for the state and federal governments, which are due to issue a response by Feb. 1. If the World Heritage folks aren’t sufficiently impressed, they could demote the reef to “World Heritage in Danger” status, along with another large reef in Belize where chunks were sold off for development, a historic Buddhist landmark in Afghanistan that was sacked by the Taliban, and a host of other brutalized spots. World Heritage listing doesn’t confer any specific legal protection per se (in the way that, say, officially designating habitat for an endangered species in the US would); rather, UNESCO provides guidance for local governments to better manage the sites. Still, the demotion could deal an embarrassing blow to the $5 billion tourism industry the reef supports—designation is largely seen as a major tourist draw, and getting booted from the list could send the signal that the reef just ain’t what it used to be.

A spokesperson for the federal Environment Department—which shares accountability to UNESCO with the Queensland state government—said in an email that the government acknowledged UNESCO’s recommendations and was compiling a plan to better protect the reef.

World Heritage designation is given to cultural and natural sites (currently nearly 1,000 worldwide) that meet a rigorous set of criteria, like the need “to contain the most important and significant natural habitats for in-situ conservation of biological diversity.” Sites in the US include California’s redwood forests and the Grand Canyon.

The proposed projects near the Reef are especially frustrating, Wishart said, because they distract conservationists’ attention away from the multitude of pre-existing problems it faces, like overfishing and water pollution.

“We have to shift to this new threat, and we haven’t fixed the old ones,” she said. “You can only dig up and ship out the minerals once. But if you look after the reef it’ll be around forever.”

Update (2/1/13): The Australian government today issued its response to UNESCO, assuring the World Heritage board that no new infrastructure had been approved since UNESCO’s initial warning, and that the government would not compromise the reef’s environmental security for the sake of economic development. It also committed an additional A$800,000 to combat the crown-of-thorns starfish, one of the reef’s greatest natural threats. Still, the promises were not enough to satisfy local environmental advocates, who gave the government poor marks on a new scorecard of its plans to manage the reef.