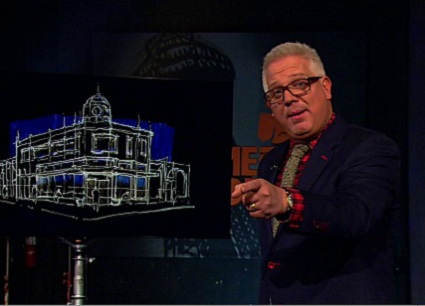 Glenn Beck may not be a Fox News contributor anymore, but he’s not content to be just another talking head on the AM dial either.

Beck, whose anti-Obama rhetoric leading up to the 2008 election landed him a job on Fox, and whose tearful pleas to Americans helped invigorate the Tea Party, isn’t stopping at punditry. As MoJo’s Tim Murphy reported last Friday, it appears the new gold-standard of conservative punditry is building your very own city-theme park hybrid, where Americans can learn all the values that make this country great except, one imagines, the value of organic communities.

Beck’s grand planned commmunity will be called Independence, USA (if it’s ever built) which is not quite as catchy as Freedom, USA, or America, USA, but we won’t dock points for lack of creativity just yet.

Honestly, while this may be even sillier than the Free State Project, which was pretty unbelievably silly, the fact is Glenn Beck is in the news again after a long dry spell. That we’re talking about him at all may mean he’s already won this small battle. Like Sarah Palin before him, Beck is doing whatever he can to remain relevant in a post-Tea Party political climate.

Indeed, it’s not looking good for the tri-corner hat industry. According to Rasmussen, only 8 percent of voters self-identify as Tea Party members now, down from a high of 24 percent in April 2010. Meanwhile 49 percent of voters view the Tea Party unfavorably, compared to a 30 percent favorability rating. And this is from Rasmussen, a polling outfit not exactly harsh on conservatives.

That’s why Beck’s latest scheme may have more relvelance than its pure entertainment value: It’s a sign that the Tea Party is beginning to fade and the pundits who used to sing its praises are showing just how desparate they’ve become. When even Ann Coulter is chastising her fellow commentators about the rules of defeat, you know something is seriously shaky inside the far-right GOP’s house of cards.

Meanwhile, powerful financiers at the RNC are starting to worry about the direction the party has taken, and popular Republican governors like Chris Christie are speaking out about the absurd failings of leadership in the Republican-controlled House. Beck’s Independence project may be a joke, but it’s just one more sign that the far right is in big trouble.

For my part, I say we encourage Beck to build it (thus fulfilling his desire for freedom) and then let him secede from the Union (allowing him to scratch that independence itch.) I could think of a worse fate for America than a few of our louder and more ridiculous pundits going Galt.