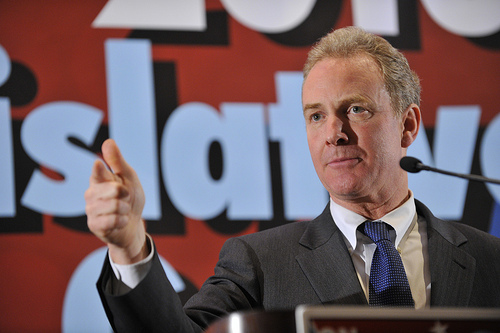 On Wednesday, Democrats in Congress took their first big step of the 113th Congress toward staunching the flow of money into US political campaigns. A group of House Democrats unveiled a trio of political money-themed bills, each proposing to establish new public campaign financing that would reward candidates for hauling in lots of small donations instead of fewer, larger ones, by matching small-dollar donations with public funds and tightening the rules governing super-PACs.

The 2012 presidential election marked the first time since the post-Watergate creation of public financing system that neither party’s candidate accepted public money to fund his campaign. And little surprise why: Had they accepted public financing, Obama and Romney would’ve received a paltry $45.6 million for the primary season and $91.2 million each for the general election. Instead Obama raised roughly $1.2 billion overall and Romney raised more than $900 million.

In addition to revamping the public financing of federal elections to encourage more courting of small donors, the “Empowering Citizens Act,” introduced by Reps. David Price (D-N.C.) and Chris Van Hollen (D-Md.), would beef up rules banning coordination between super-PACs and campaigns, which critics say aren’t strong enough right now. Congressional Democrats point to super-PACs such as Restore Our Future, which spent $152 million solely to elect Romney, and Priorities USA Action, which spent $74 million to elect Obama, as evidence of the blurry lines between candidate-specific super-PACs and the candidates’ campaign. For instance, Romney appeared at a fundraiser for Restore Our Future, and top Obama advisers such as David Plouffe and David Axelrod spoke at Priorities events. (Conservatives dismiss the notion that this constitutes coordination and say Democrats just want to restrict the speech of outside groups with whom they don’t agree.)

Another of the new bills, the “Grassroots Democracy Act” offered by Rep. John Sarbanes (D-Md.), would create a small-donor matching system as well as a “People’s Fund,” which would send additional federal money to candidates in races flooded with outside money and, in Sarbanes’ words, “the voices of grassroots candidates are being drowned out.” The third bill, the “Fair Elections Now Act” introduced by Reps. John Yarmuth (D-Ky.) and Chellie Pingree (D-Me.), would provide a 5-to-1 match of donations of $100 or less from in-state donors in the primary and general elections.

In the weeks ahead, House Democrats say, they plan to hash out a compromise bill that incorporates what they believe are the best ideas of the three bills introduced on Wednesday. Of course, with Republicans in control of the House, any legislation aimed at reforming money in politics is dead-on-arrival. But with the ebb and flow of Congressional control, Democrats will inevitably find themselves back in charge of the House in two or four or six years, and when they do, Democrats and reform advocates say they want a tough, comprehensive campaign finance bill ready to grab off the shelf and put into play.