From the House’s new impeachment caucus to the lone-wolf “lock and load” government resisters, Mother Jones is compiling the craziest of the right-wing reactions to President Obama’s gun violence initiatives. Got more suggestions? Add them in the comments.

The bowhunting guitarist took to airwaves to declare war on “Eric gun-running Holder, Hillary no-security-for-Clinton, and Barack ACORN Obama, and all of these leftist minions,” exhorting listeners to stock up on holsters and AR-15s:

We want Eric Holder arrested…We want Hillary Clinton arrested…We want to know where Barack Obama got the authority to spend like a drunken maniac and blowtorch all these tax dollars following the Cloward-Piven and Saul Alinsky playbook to destroy the last, best quality of life in the world and it’s called the United States of America. Barack Obama, Hillary Clinton, Joe Biden, and Eric Holder are the enemy of the state.

After incorrectly assuming that President Obama was going to ban assault weapons by executive order, the tactical-weapons trainer vented on YouTube: “Fuck that. I’m telling you that if that happens it’s gonna spark a civil war, and I’ll be glad to fire the first shot…I am not letting my country be ruled by a dictator, I’m not letting anybody take my guns. If it goes one inch further, I’m gonna start killing people.” Yeager has since had his gun-carry license yanked by the Tennessee Department of Safety.

In this heavy-metal infused video that interposes shots of Obama with Iranian President Mahmoud Ahmadinejad, a self-described New Jersey police officer and Oathkeeper exhorts his fellow peace officers to disobey illegal orders: “There might be a time in the near future, for instance, if this…Feinstein bill gets through, and what if she doesn’t has the votes, and now it gets passed up to the president, and he signs it by executive fiat? What are you gonna do? It’s a law now. What are you gonna do?” Fortunately, since POTUS didn’t issue such an executive fiat, the issue is moot. 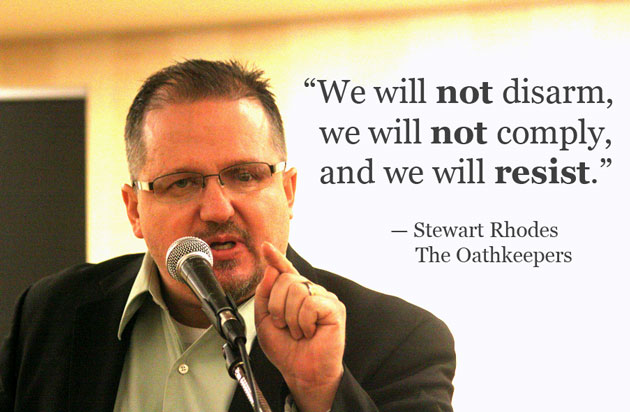 In a 1,747-word December manifesto, the Oathkeepers founder argued “that our semi-automatic, military pattern rifles are the single most important kind of arm we can own,” and pledged “to refuse compliance with any and all laws that attempt to strip me and my children of those arms, the full capacity magazines needed to load and fire them, or the parts and ammunition needed to keep them firing…We will not disarm, we will not comply, and we will resist.”

The enfant terrible of conspiracy theorists used great white sharks and hot spittle to warn CNN’s Piers Morgan that “1776 will commence again if you try to take our firearms! It doesn’t matter how many lemmings you get out there in the street begging for them to have their guns taken. We will not relinquish them. Do you understand?” 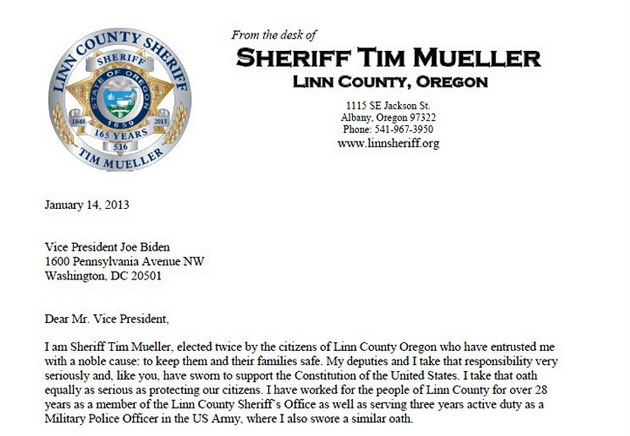 Any federal regulation enacted by Congress or by executive order of the President offending the constitutional rights of my citizens shall not be enforced by me or my deputies, nor will I permit the enforcement of any unconstitutional regulations or orders by federal officers within the borders of Linn County Oregon. 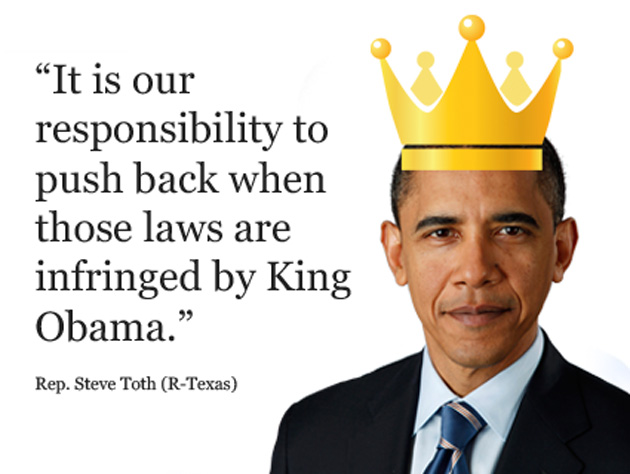 Republican state Reps. Steve Toth, John Otto, Jim Pitts, and Drew Darby are working on passing a Firearms Protection Act that would permit state authorities to imprison federal officials who try to enforce any new gun laws. Citing the state’s constitutional freedoms, Toth said, “It is our responsibility to push back when those laws are infringed by King Obama.”

The Senate’s No. 1 Randian announced on Fox Wednesday that he would introduce a bill to nullify “anything the president does that smacks of legislation.” “I’m against having a king. Having a monarch is what we fought the American revolution over,” Paul told CBN earlier in the week, “and someone who wants to bypass the Constitution, bypass Congress, that’s someone who wants to act like a king or a monarch.” 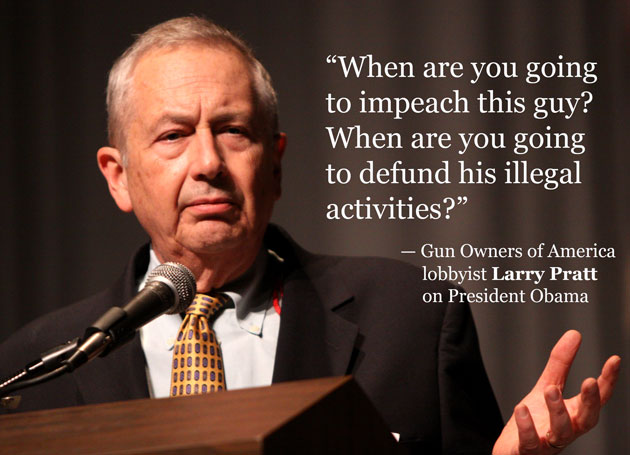 The head of Gun Owners of America told a radio interviewer that he had a simple message for Congress: “When are you going to impeach this guy? When are you going to defund his illegal activities? Republicans can’t continue, at least I hope they cannot, continue to be spectators while the country is being torn apart.” Pratt then theorized that progressives’ gun views are formed by their paganism: “The left, which is largely made up of people who don’t believe in Jesus Christ’s blood as being necessary for our salvation, view inanimate objects as possessing their own will.”

This gentleman from Texas, who has a long history of crazy, spearheaded the first call to impeach Obama for overreaching on gun violence. “We have a president who’s stepped over the line,” he told Fox News earlier this week. “He’s not a king!” Stockman then compared Obama to Saddam Hussein for “using children” in the gun debate.

Asked by a local conservative blogger about impeachment proceedings, the freshman congressman said he was comfortable with the idea. Americans “have completely lost our checks and balances in this country, the Congress needs to hold the President accountable for the decisions that he’s making right now, and [that’s] why again, I would say that all options should be on the table.” 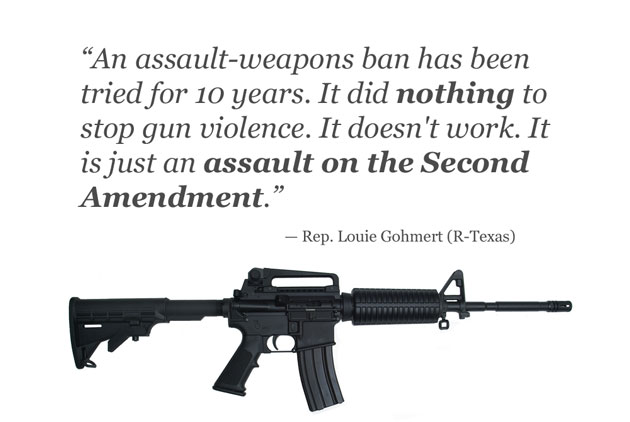 The always-colorful congressman told Newsmax that impeachment was on the table. “That is something to consider if the president is going to attempt to destroy the Constitution strictly with a pronouncement of his mouth or the stroke of his pen,” he said, adding, “No one branch has overstepped its boundaries like this president has.” Asked about an assault weapons ban, Gohmert poured it on: “Let’s face it, a knife can be an assault weapon, a machete—in Rwanda, they slaughtered 800,000 people with machetes. An assault weapons ban has been tried for 10 years. It did nothing to stop gun violence. It doesn’t work. It is just an assault on the Second Amendment.” 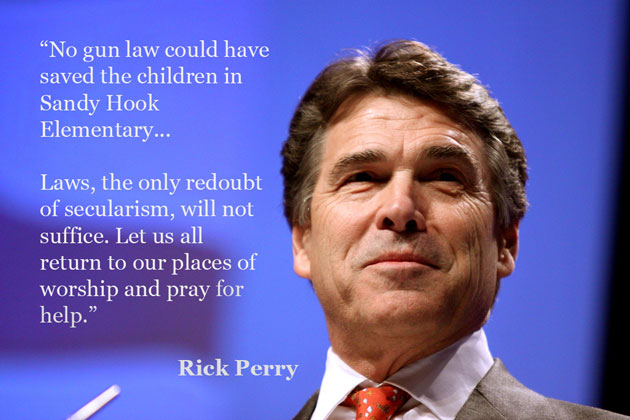 The sad young man who did that in Newtown was clearly haunted by demons and no gun law could have saved the children in Sandy Hook Elementary from his terror. There is evil prowling in the world—it shows up in our movies, video games and online fascinations, and finds its way into vulnerable hearts and minds. As a free people, let us choose what kind of people we will be. Laws, the only redoubt of secularism, will not suffice. Let us all return to our places of worship and pray for help. Above all, let us pray for our children. In fact, the piling on by the political left, and their cohorts in the media, to use the massacre of little children to advance a preexisting political agenda that would not have saved those children, disgusts me, personally. The Second Amendment to the Constitution is a basic right of free people and cannot be nor will it be abridged by the executive power of this or any other president. 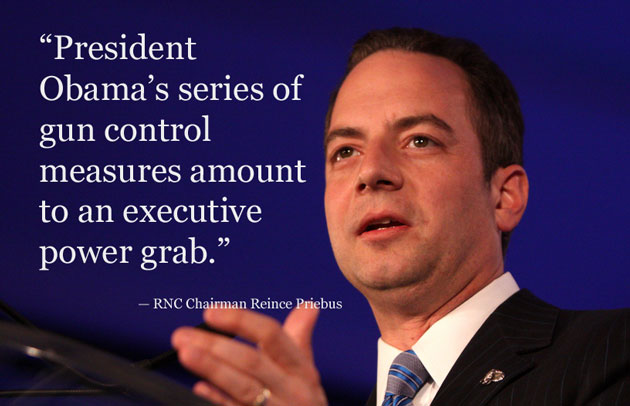 Priebus, the chairman of the Republican National Committee, issued a press release Wednesday blasting POTUS: “President Obama’s series of gun control measures amount to an executive power grab that may please his political base but will not solve the problems at hand. He paid lip service to our fundamental constitutional rights, but took actions that disregard the 2nd Amendment and the legislative process.” (There’s one problem with that line of argument: Nothing Obama proposed Wednesday actually disregards the Constitution or Congress.) 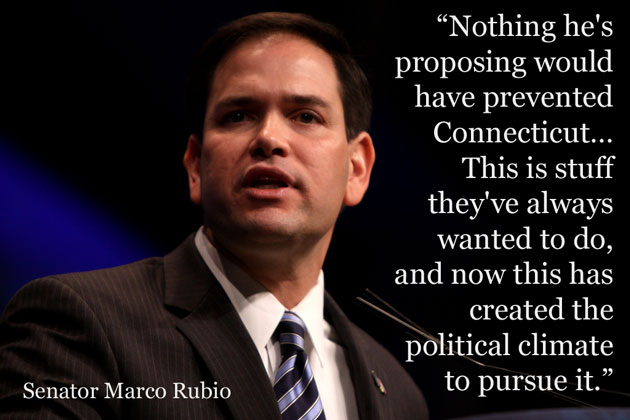 The fresh-faced freshman accused Obama of imperial overreach and exploitation. “The impetus for all of this was the shooting in Connecticut, right? That’s what led to this. And yet nothing he’s proposing would have prevented Connecticut,” he told Fox News. “This is stuff they’ve always wanted to do, and now this has created the political climate to pursue it.”

Famed for her past Islamophobic campaigns, Ellmers jumped on the blame train Wednesday. “President Obama is once again exploiting a tragedy for political gain and eroding our constitutional rights for the sake of an extreme liberal agenda,” she said, adding, “attacking our legal rights and liberties through abusive executive orders destroys the very principles that have protected our citizens from oppressive government power for over 236 years.” 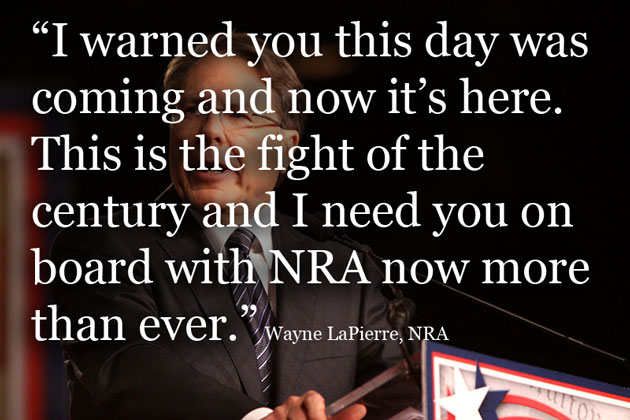 The NRA executive director, who popularized the term “jack-booted government thugs” to refer to federal law enforcement officers, told supporters he was in war mode this week. “I warned you this day was coming and now it’s here,” he wrote in a fundraising letter. “This is the fight of the century and I need you on board with NRA now more than ever…Right now, they’re steamrolling ahead with legislation that would ban your guns, register your ammunition purchases, and even force you to register the firearms you already own with Obama’s anti-gun bureaucrats.” 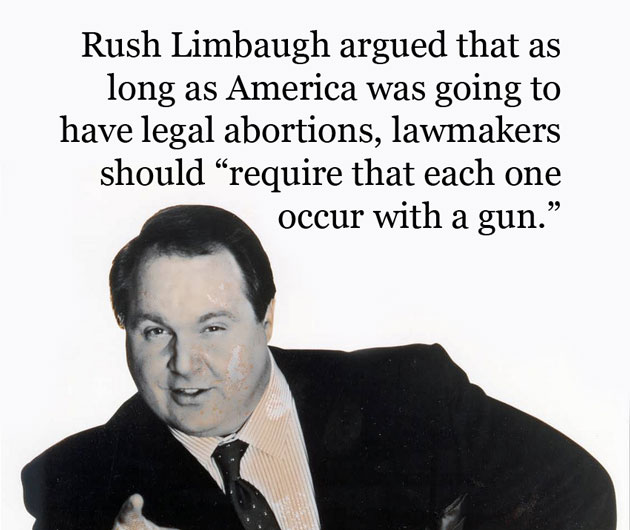 After mocking the children onstage during the president’s gun violence announcement as “human shields,” the shock jock mused that the president was attempting to exact revenge on “bitter clingers”—that is, gun-loving patriots. He then argued that as long as America was going to have legal abortions, lawmakers should “require that each one occur with a gun.”

After telling Fox News that most of Obama’s executive orders were ineffectual, meaningless bureaucratic recommendations, the right-wing talk-show host changed his mind: “There are certain things in his executive orders that are un-American. In some ways they’re even fascistic.” Goaded on by Neil Cavuto, he continued: “Obama doesn’t believe in legislation. He believes in executive fiat…The attempt to nationalize the medical profession, and have doctors reporting their clients to the federal government, this is 1930s stuff. The American people need to rise up against that. The medical profession needs to say no.”

Though he’s been fairly quiet through the latest gun debate, Townsend made waves in 2007 when CNN chose his recorded question to ask candidates in the Democratic presidential primary debate. “Tell me your position on gun control, as myself and other Americans really want to know if our babies are safe,” he said. Then, brandishing an AR-15 for the camera, he added, “This is is my baby.” Joe Biden, coauthor of the 1994 Assault Weapons Ban—who as vice president chaired the panel that made gun-policy recommendations to President Obama this week—quipped: “I’ll tell you what, if that is his baby, he needs help…I don’t know that he is mentally qualified to own that gun.”