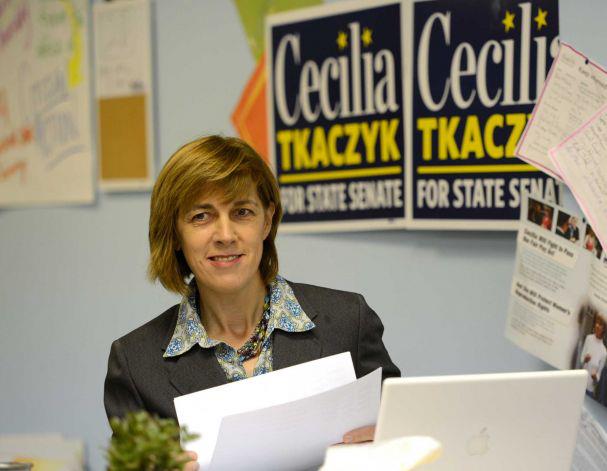 You probably haven’t heard of Cecilia Tkaczyk—CeCe to her friends. But the nation’s leading activists fighting to get big money out of politics want you to hear her story. After months in court, Tkacyzk squeaked out the second-narrowest win in the history of New York’s state Senate, a win progressives are hailing as a potential turning point in the fight to clean up Albany’s noxious politics. And if they can pass reform in New York, the front line of the campaign finance wars, activists believe they can pressure other states to do the same.

Liberals love Tkaczyk because she made the public financing of elections a central issue, if not the issue, in her campaign. The underdog in a race against GOP state Assemblyman George Amedore, Tkaczyk proposed replacing New York State’s lax campaign finance system with a voluntary program that matches small-dollar donations with taxpayer money. The idea: nudge candidates to court lots of less wealthy individual donors instead of wooing a handful of rich ones. Throughout the campaign, Tkaczyk pressed Amedore on the campaign cash issue, and in the final weeks of the campaign, Amedore turned around and attacked her specifically over public financing, ripping it as too costly and unnecessary.

Strange, right? Two candidates locking horns over…campaign finance? Yet in the Amedore-Tkaczyk race, the dry, unsexy issue of money in politics was front and center.

After the ballots had been counted, and a few dozen votes separated Amedore and Tkacyzk, the election headed to the courts. The two sides fought over which ballots to count and which to exclude, Amedore briefly took a 37-vote lead, but then, more than two months after the election, the court’s decision to count a few more ballots tipped the race to Tkacyzk. According to the current count, she won by 19 votes. Campaign reformers point to her victory as proof, albeit on a small scale, that corruption and the influence of money in politics resonates with voters, and that an anti-big-money candidate can win by running on this specific issue. “Her victory shows that voters will support candidates who champion real campaign finance reform, including citizen-funded elections,” says Jonathan Soros, who runs Friends of Democracy, which he calls an anti-super-PAC super-PAC.

Yes, Tkaczyk had lots of help. Progressive groups such as Citizen Action of New York and the Working Families Party phone-banked and knocked on doors. Soros’ super-PAC spent $265,000 on polling, TV ads, and phone calls to elect Tkaczyk, focusing on the campaign finance issue. And Protect Our Democracy, another pro-reform super-PAC started by investor Sean Eldridge, the husband of Facebook cofounder Chris Hughes, spent thousands more to back Tkaczyk while highlighting the campaign money issue. If all that spending sounds a tad ironic to you—outside groups spending big to support an anti-big-money candidate—that’s because it is.

But Soros and Eldridge say they want to build a coalition of pro-campaign-reform candidates in New York State, and they argue that it takes money to do so. They focused on New York State Senate races because Democratic Gov. Andrew Cuomo has repeatedly signaled his support for public financing—but he needs the legislature to send him a bill. Tkaczyk’s win adds another pro-reform Democrat to the state Senate. Now, in a divided state Senate, the hard work begins. “It’s now up to Ms. Tkaczyk,” the Albany Times-Union wrote in an recent editorial, “and all those politicians from Gov. Andrew Cuomo on down who say they stand for campaign reform to live up to their promises to do it.”