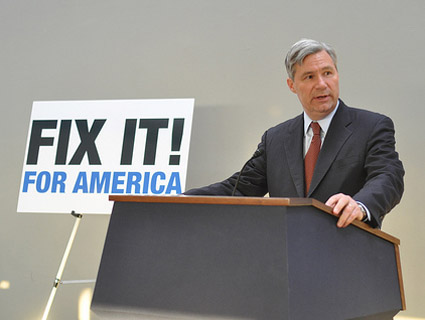 Rep. Henry Waxman (D-Calif.) and Sen. Sheldon Whitehouse (D-R.I.) announced on Thursday that they are forming a joint House-Senate Climate Change Task Force. The effort will be “dedicated to focusing Congressional and public attention on climate change and developing effective policy responses.” Any member of Congress interested in the issue can join.

The group intends to release reports, memoranda, and correspondence “to advance the group’s goal of increasing awareness and developing policy responses to climate change.”

The task force’s first action is a letter sent today to President Obama asking him to outline specific steps that federal agencies will take to get the country to the administration’s previously stated goal of reducing greenhouse gas emissions 17 percent by 2020. They also asked him to scale up investment in clean technology and develop a strategy for dealing with climate impacts across the US. Obama gave climate change significant space in his inaugural address earlier this week, but hasn’t yet outlined plans to deal with it in his second term.

“The window to deal effectively with a warming planet and to mitigate long-term risks is quickly closing,” they wrote in the letter, which was also signed by Rep. Ed Markey (D-Mass.). “Our best hope to change course is to forge together a national consensus that insists on addressing climate change. And our best hope for forging that consensus is the presidential leadership we know you can give to this issue.”

The letter pretty much acknowledged that Congress isn’t likely to do much in terms of meaningful action, which puts the onus on Obama to take executive action. “We in Congress need your leadership most of all. Virtually all Republicans in Congress opposed comprehensive climate legislation in the 111th Congress, and they voted to strip EPA of regulatory authority in the last one. Progress is Congress may be so difficult or protracted that you should not hesitate to act.”