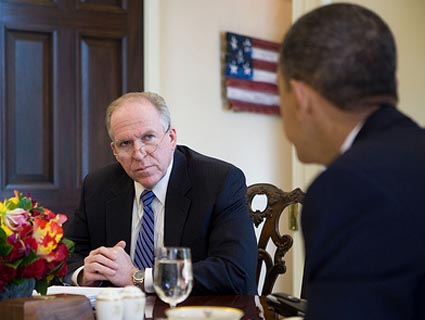 Four years ago, White House counterterrorism adviser John Brennan withdrew his name from consideration to run the Central Intelligence Agency. On Monday, President Barack Obama announced Brennan was his pick for the job, following the resignation of David Petraeus over an extramarital affair.

In his 2008 letter taking himself out of contention for CIA director, Brennan referred to “strong criticism in some quarters prompted by my previous service with the Central Intelligence Agency.” What Brennan meant was that he had defended coercive interrogation (except for waterboarding) and backed warrantless surveillance—approaches to counterterrorism that enraged civil libertarians and that Obama had rejected as a presidential candidate.

Brennan’s nomination “raised concerns,” the American Civil Liberties Union said Monday, and called on the Senate to “assess the role of the CIA—and any role by Brennan himself—in torture, abuse, secret prisons, and extraordinary rendition during his past tenure at the CIA, as well as review the legal authorities for the targeted killing program that he has overseen in his current position.”

Back in 2008, this sort of civil-liberties-based opposition to Brennan made sense. Obama had promised to reverse many of the Bush-era excesses in the war on terror. Having Brennan at the CIA was unacceptable to the left because it signaled not only that Obama wouldn’t go after torturers or curtail violations of civil liberties, but also that the promised shift away from Bush-era policies would never come.

Brennan didn’t become CIA chief, but it hardly mattered: Obama’s first term unfolded almost exactly as Brennan’s liberal critics had feared. The Justice Department watered down its internal ethics investigation against Bush lawyers who sanctioned torture. It declined to prosecute CIA interrogators who went beyond even the “legalized” torture guidelines while prosecuting former CIA official John Kiriakou for talking about the program. The Obama administration expanded the use of targeted killing, blocked attempts to establish stronger oversight over government surveillance, and has repeatedly broken its promise of greater transparency in the war on terror, trotting officials like Brennan out to defend the administration’s counterterrorism policies as legal while refusing to release the actual government documents justifying them.

Brennan has, according to many reports on the internal dynamics of the Obama administration, advocated restraint in the use of targeted killing, despite publicly making unbelievably rosy assessments of drone strikes‘ impact on civilians. He has publicly defended the use of the civilian justice system to handle terror suspects, angering Republicans who tried to suggest that an FBI interrogation is akin to being interviewed on cable news. According to author Daniel Klaidman, Brennan also supported Obama’s failed effort to close Guantanamo. Most of these positions are actually consistent with those of the late Bush administration, though the GOP’s rightward shift makes it seem otherwise. The Senate should use Brennan’s confirmation to scrutinize Obama administration policies—but it’s unlikely that a different nominee would mean a different course.

Everything that civil-liberties advocates feared might have come to pass if Brennan had been appointed at the CIA happened anyway. Which is to say that it’s impossible to make a case against Brennan running the CIA that isn’t also a case against Obama. It’s Obama, not Brennan, who is ultimately responsible for the policies of the past four years. Those won’t change unless Obama wants them to, whether Brennan runs the CIA or not.