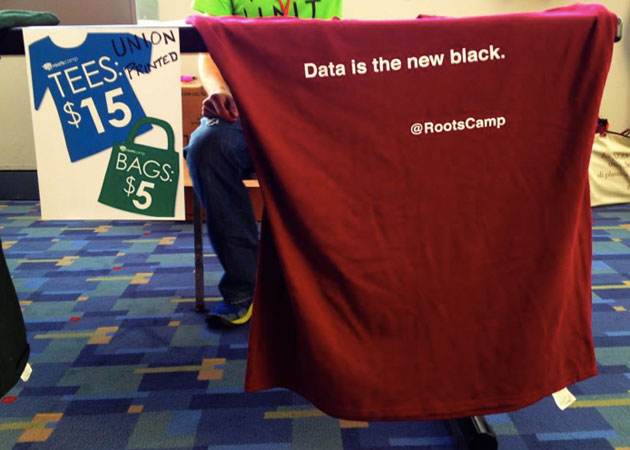 If the first rule of espionage is to keep your cover, Patrick Ruffini’s sortie into the heart of the left-wing conspiracy should probably be considered something of a bust. It didn’t help that he announced his intentions one day in advance, via Twitter:

In less than 12 hours, the #infiltration begins. #roots12

The 34-year-old former RNC staffer is one of the GOP’s top gurus for all things digital. Roots Camp, an annual gathering hosted by the New Organizing Institute, is where Democratic organizers go to debrief—or, as in the case of Obama for America’s army of attendees, take a victory lap. The names of the panels alone tell the story: “Unfucking Elections with Data”; “Memeification of Rapid Response Social Media Fast & Furious”; “How to generate 1000 tweets using segmented email blasts”; and my personal favorite: “Hot Open Source Web Mapping.”

This isn’t a place for pundits to ruminate about The Narrative; it’s a nuts-and-bolts education venture. And this year’s lesson is clear: 2012 was the year campaigns’ digital outfits and field organizers began to merge as one, and as a consequence, any session that so much as hints at how to bridge the two seems to be overflowing with dozens of twentysomethings, fresh from electoral success, tapping away on their laptops. As one of the early arrivals at the Friday after-lunch panel on microtargeting (“Modeling Monkey Owners”) put it, “Data is sexy now.”

When I track down Ruffini, he’s lurking in the back of a breakout session, dressed to blend in in green Chuck Taylors and a fleece jacket, tweeting up a storm and taking notes. About 100 people are crammed into seats or on the floor or propped up against the walls to hear Aaron Strauss, the director of targeting and data at the Democratic Congressional Campaign Committee, explain why Nate Silver, the New York Times‘ polling guru, is full of crap. This would normally be the part of the story where Strauss is struck down by a lightning bolt or some other such instrument of divine retribution, but Strauss makes a compelling case.

The audience, like an overflowing freshman seminar with the cool professor, listens attentively as Strauss breaks down the fundamental issue with Silver’s analysis of which states are most likely to swing back and forth. It assumes that the demographics most likely to swing one way or another are those in the middle. That’s just not what the numbers say, Strauss insists. The problem, supposedly, is that Silver’s information is limited to crude exit polling, whereas Strauss’ information comes from phone calls and in-person contacts. “That’s where it crumbles,” he says. “That’s where the house of cards fall down.”

Since Election Day, there’s been much introspection on the right about the various ways in which the left is kicking its ass—and how the GOP can turn things around. It needs to become more appealing to Silicon Valley. It needs to reinvest in Big Data. It needs its own Analyst Institute. It needs a ground game. Ruffini has been a source of much of that harping, which is part of the reason he’s made his visit to Roots Camp in the first place.

“I don’t know that I’m surprised by anything I’ve seen here,” Ruffini says when it’s over. But it’s revealing nonetheless. “I’m sort of more impressed by the scale of it, the level of participation and interest in these topics, that I’ve seen tangentially discussed in Republican circles, but mostly in conference rooms, not at conferences. And for what it’s worth, that perspective, the data-driven perspective, did not win out in our campaigns this year.”

The right has no shortage of conferences for activists, but nothing as purpose-driven and digitally savvy as Roots Camp. For that matter, it has no real answer to the New Organizing Institute itself, which operates in perpetual election mode, grooming Democratic field operatives across the country. “I mean look I think you’ve got RightOnline, you’ve got a number of major conferences that cater to conservatives,” he says. “I don’t know that any are quite as focused on digital as this. It’s the next step in the evolution.” And Ruffini’s not the only one studying up on the new Chicago machine. When top Democratic and Republican campaign aides gathered at Harvard last week to talk about the race, GOPers packed talks by Obama staffers. As one Republican strategist told BuzzFeed, “We got our butts kicked, so I’m going to school.”

There’s a certain irony to the right’s newfound introspection: After four years of demonizing the commander-in-chief as an Alinskyite radical, conservatives have fallen in love with community organizing.