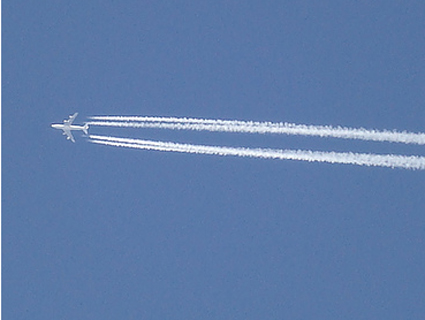 Climate negotiators are meeting in Doha through the end of this week, but as I reported last week, no one expects anything big to come out of that meeting. The US negotiating team showed up at this year’s conference claiming that our country is making an “enormous” effort to deal with climate change. “Those who don’t follow what the US is doing may not be informed of the scale and extent of the effort, but it’s enormous,” negotiator Jonathan Pershing told the folks in Doha.

Forgive me for being a cynic, but…come on. Let’s start by pointing out that, as this most recent climate negotiation was revving up, President Obama was quietly signing a law that blocks US airlines from participating in the European Union’s plan to curb emissions from airplanes.

The European Union initiated a new policy last January that requires airlines to buy carbon offsets for all international flights into and out of EU nations. But after the US threw a hissy fit about the plan, the EU agreed to delay implementation for a year in order to let the International Civil Aviation Organization (ICAO), the United Nations agency governing aviation policy, take a stab at the issue instead. (EU-based airlines still have to pay the carbon fee; only foreign carriers are exempt during the one-year delay.)

It wasn’t a surprise that Obama signed the bill into law. The Senate and House voted to block US airlines from participating in the carbon offset program several months ago, and the departments of State and Transportation have been on the record opposing the move since last year. The White House says that it is “firmly committed to reducing harmful carbon pollution from civil aviation both domestically and internationally,” but that it thinks that the EU’s plan “is the wrong way to achieve that objective.” Officials want ICAO to come up with a multilateral alternative.

But as Reuters points out, ICAO has been talking about how to deal with airline emissions for more than a decade. Perhaps the EU-US spat will increase the pressure to actually do something, but I’m not that convinced it will. The US and other opponents of the EU’s plans are likely to block anything too significant within the ICAO as well.

This is also significant for the climate negotiations, as a carbon levy on planes and cargo ships is an option for long-term financing that negotiators have been discussing for some time now. Blocking the EU’s efforts to make that happen isn’t exactly a promising sign. Meanwhile, ICAO predicts that emissions from aviation will increase 300 to 700 percent by 2050.

It’s also worth pointing out that the airlines are going to pass the cost onto consumers, and it’s only expected to cost about $2.60 to $3.90 per ticket in the initial years. If you can afford to fly to Europe in the first place, chances are that’s not going to kill you.