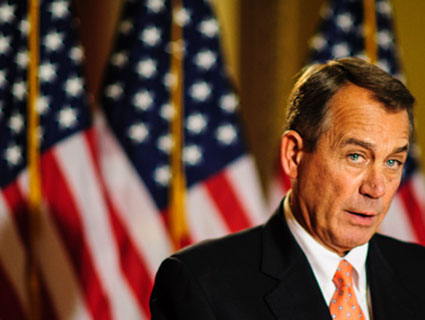 On Monday, President Obama rolled out his latest deficit deal compromise, which would reauthorize the Bush tax cuts for those making under $400,000, extend unemployment benefits, and cut Social Security spending. It’s pretty close to the deal House Speaker John Boehner offered last Friday. But on Tuesday, Boehner pulled out a not-so-fun sounding “Plan B,” which involves letting tax cuts expire for those with income above $1 million…and then just not really dealing with the rest of that fiscal cliff thing.

Democrats say Plan B is a signal that Boehner has backed out of negotiations over the fiscal cliff. And now the center-left Center for American Progress has taken a look at Plan B, and found it wanting.

CAP reports that Boehner’s plan would raise taxes on millions of middle class and poor families, “seriously damage” the economy and do precious little to address the long-term deficit. “Other than that, it’s a great idea,” snark authors Michael Linden, director for tax and budget policy and Michael Ettlinger, vice president for economic policy.

Because Boehner’s plan fails to extend several expiring tax credits for poor and middle-class households, more than 20 million families would see a pretty big tax increase next year. The richest Americans do better. According to Linden and Ettlinger, only 300,000 millionaire households would see a tax increase. This translates into a bigger tax hike on the middle class than on millionaires.

Also, by doing absolutely nothing to address sequestration—the severe scheduled cuts in domestic and military spending—and nothing about the expiring payroll tax credit or unemployment insurance, “Plan B” would cost the economy up to 2.7 million jobs next year, according to the Congressional Budget Office, successfully tanking the economy.

On Wednesday, Obama slammed Boehner for crying uncle and backing out of the deal-making process. “Take the deal,” Obama said. “[Republicans] keep finding ways to say ‘no’ rather than to say ‘yes.'” Senate Majority Leader Harry Reid (D-Nev.) has promised to block the plan if it passes the House, and Obama said he’d veto it.

Rep. Chris Van Hollen (D-Md.) said in a statement that “Plan B stands for backing out.”