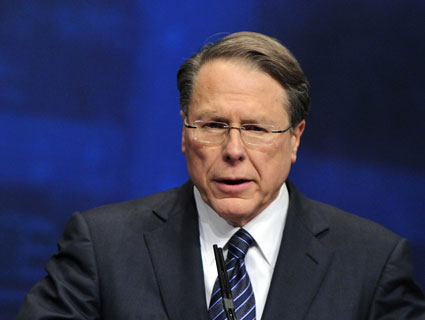 At the National Rifle Association’s first press conference since the Newtown massacre that killed 27 people, most of them elementary school children, the gun lobby’s CEO Wayne LaPierre said the solution is more guns.

“There exists in this country a callous, corrupt and corrupting shadow industry that sells, and sows, violence against its own people,” said LaPierre. He was talking about the entertainment industry, not groups such as the NRA that lobby for laws that allow people to get away with murder. Rolling out a list of 1990s-era conservative cultural shibboleths, LaPierre blamed a coarsening culture, and violence in movies, video games, and music for mass shootings—that is, everything but the deadly weapons the killers have used to slaughter people.

LaPierre’s “solution” is for Americans to arm themselves, and for the government to place armed guards at every public school in the country: “I call on Congress today to act immediately, to appropriate whatever is necessary to put armed police officers in every school—and to do it now, to make sure that blanket of safety is in place when our children return to school in January.” LaPierre did not note that Columbine High School had an armed guard when two students went on a murderous shooting rampage there in 1999, and that Virginia Tech had an armed police force with its own SWAT team equivalent when one of its students killed 33 people in 2007.

The head of the nation’s most powerful gun rights organization laid out a vision of a paramilitary America, where citizens are protected by armed guards until they are old enough to walk around with their own firearms on the off-chance they might need to pump a few rounds into a fellow citizen. “The only thing that stops a bad guy with a gun is a good guy with a gun,” said LaPierre. “Would you rather have your 911 call bring a good guy with a gun from a mile away … or a minute away?” Yet outside of video games, civilians rarely stop mass shooters.

While encouraging Americans to buy more guns—which would enrich the companies that fund the NRA—and station gun-toting guards at all schools, LaPierre declined to support any compromise on gun restrictions. And he engaged in a brazen act of hypocrisy. He warned of a society “populated by an unknown number of genuine monsters—people so deranged, so evil, so possessed by voices and driven by demons that no sane person can possibly ever comprehend them.” He went on:

They walk among us every day. And does anybody really believe that the next Adam Lanza isn’t planning his attack on a school he’s already identified at this very moment? How many more copycats are waiting in the wings for their moment of fame—from a national media machine that rewards them with the wall-to-wall attention and sense of identity that they crave—while provoking others to try to make their mark? A dozen more killers? A hundred? More? How can we possibly even guess how many, given our nation’s refusal to create an active national database of the mentally ill?

Brushing aside the disturbing implications of a national database of the “mentally ill,” LaPierre and the NRA have done everything in their power to ensure that people who might be credibly identified as “deranged” can easily purchase guns without a background check. The gun lobby has fiercely opposed vetting private sales of firearms outside of licensed gun stores. Creating a national database of “monsters” would mean little if mentally ill people could still acquire guns by other means without undergoing checks. It seems unlikely that LaPierre, having thwarted basic background checks, sincerely supports the much more intrusive approach of a national database. Given that he refused to take questions at the press conference, none of the reporters there could call him out.

LaPierre also neglected to mention the high-powered, military-like rifles that three spree killers have used this year or the high-capacity magazines that have allowed these criminals to murder large numbers of people without having to stop to reload.

This press conference was bizarre. LaPierre was defiant and defensive in attacking straw men, and he refused to engage with the national debate concerning the availability of guns of tremendous lethality. He showed no signs of any willingness to engage in compromise or even a discussion with those who are now questioning US gun policies—signalling to Republicans in Congress that they shouldn’t either.

As LaPierre was speaking, there were reports of another shooting spree.