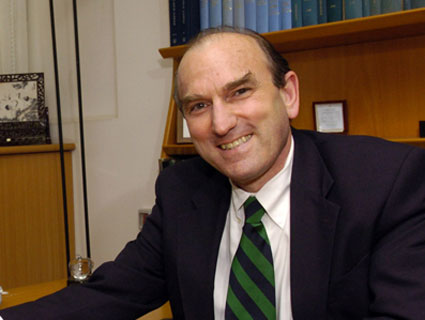 This morning I received a press release with this announcement:

The Washington Institute for Near East Policy will give Elliott Abrams, CFR’s senior fellow for Middle East Studies, its Scholar-Statesman Award at a dinner in New York City tonight. The Scholar-Statesman Award celebrates leaders who exemplify the idea that sound scholarship and a discerning knowledge of history are essential to effective policy, as well as the advancement of peace and security in the Middle East.

I nearly choked. Why? The easiest way to explain is for me to crib and post here an article I wrote for The Nation over a decade ago:

“How would you feel if your wife and children were brutally raped before being hacked to death by soldiers during a military massacre of 800 civilians, and then two governments tried to cover up the killings?” It’s a question that won’t be asked of Elliott Abrams at a Senate confirmation hearing because George W. Bush, according to press reports, may appoint Abrams to a National Security Council staff position that (conveniently!) does not require Senate approval. Moreover, this query is one of a host of rude, but warranted, questions that could be lobbed at Abrams, the Iran/contra player who was an assistant secretary of state during the Reagan years and a shaper of that Administration’s controversial—and deadly—policies on Latin America and human rights. His designated spot in the new regime: NSC’s senior director for democracy, human rights and international operations. (At press time, the White House and Abrams were neither confirming nor denying his return to government.)

Bush the Second has tapped a number of Reagan/Bush alums who were involved in Iran/contra business for plum jobs: Colin Powell, Richard Armitage, Otto Reich and John Negroponte. But Abrams’s appointment—should it come to pass—would mark the most generous of rehabilitations. Not only did Abrams plead guilty to two misdemeanor counts of lying to Congress about the Reagan Administration’s contra program, he was also one of the fiercest ideological pugilists of the 1980s, a bad-boy diplomat wildly out of sync with Bush’s gonna-change-the-tone rhetoric. Abrams, a Democrat turned Republican who married into the cranky Podhoretz neocon clan, billed himself as a “gladiator” for the Reagan Doctrine in Central America—which entailed assisting thuggish regimes and militaries in order to thwart leftist movements and dismissing the human rights violations of Washington’s cold war partners.

One Abrams specialty was massacre denial. During a Nightline appearance in 1985, he was asked about reports that the US-funded Salvadoran military had slaughtered civilians at two sites the previous summer. Abrams maintained that no such events had occurred. And had the US Embassy and the State Department conducted an investigation? “My memory,” he said, “is that we did, but I don’t want to swear to it, because I’d have to go back and look at the cables.” But there had been no State Department inquiry; Abrams, in his lawyerly fashion, was being disingenuous. Three years earlier, when two American journalists reported that an elite, US-trained military unit had massacred hundreds of villagers in El Mozote, Abrams told Congress that the story was commie propaganda, as he fought for more US aid to El Salvador’s military. The massacre, as has since been confirmed, was real. And in 1993 after a UN truth commission, which examined 22,000 atrocities that occurred during the twelve-year civil war in El Salvador, attributed 85 percent of the abuses to the Reagan-assisted right-wing military and its death-squad allies, Abrams declared, “The Administration’s record on El Salvador is one of fabulous achievement.” Tell that to the survivors of El Mozote.

But it wasn’t his lies about mass murder that got Abrams into trouble. After a contra resupply plane was shot down in 1986, Abrams, one of the coordinators of Reagan’s pro-contra policy (along with the NSC’s Oliver North and the CIA’s Alan Fiers), appeared several times before Congressional committees and withheld information on the Administration’s connection to the secret and private contra-support network. He also hid from Congress the fact that he had flown to London (using the name “Mr. Kenilworth”) to solicit a $10 million contribution for the contras from the Sultan of Brunei. At a subsequent closed-door hearing, Democratic Senator Thomas Eagleton blasted Abrams for having misled legislators, noting that Abrams’s misrepresentations could lead to “slammer time.” Abrams disagreed, saying, “You’ve heard my testimony.” Eagleton cut in: “I’ve heard it, and I want to puke.” On another occasion, Republican Senator Dave Durenberger complained, “I wouldn’t trust Elliott any further than I could throw Ollie North.” Even after Abrams copped a plea with Independent Counsel Lawrence Walsh, he refused to concede that he’d done anything untoward. Abrams’s Foggy Bottom services were not retained by the First Bush, but he did include Abrams in his lame-duck pardons of several Iran/contra wrongdoers.

Abrams was as nasty a policy warrior as Washington had seen in decades. He called foes “vipers.” He said that lawmakers who blocked contra aid would have “blood on their hands”–while he defended US support for a human-rights-abusing government in Guatemala. When Oliver North was campaigning for the Senate in 1994 and was accused of having ignored contra ties to drug dealers, Abrams backed North and claimed “all of us who ran that program…were absolutely dedicated to keeping it completely clean and free of any involvement by drug traffickers.” Yet in 1998 the CIA’s own inspector general issued a thick report noting that the Reagan Administration had collaborated with suspected drug traffickers while managing the secret contra war.

So Bush the Compassionate may hand the White House portfolio on human rights to the guy who lied and wheedled to aid and protect human-rights abusers. As Adm. William Crowe Jr. said of Abrams in 1989, “This snake’s hard to kill.”

Abrams was rehabbed by the foreign policy crowd years ago. But he still has blood on his hands. I wonder what they’ll be serving at the dinner.