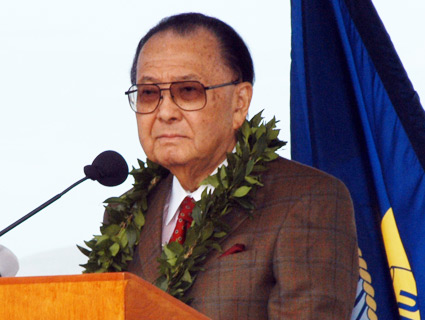 On Monday, Sen. Daniel Inouye (D-HI) passed away due to respiratory complications at the age of 88. His last word before dying was, according to his office’s press release, “Aloha.”

Inouye, the second longest serving senator in American history, was noted for his involvement in both the Watergate and Iran-contra investigations. He delivered the keynote at the infamous 1968 Democratic National Convention in Chicago. He was the first Japanese American to serve in the US Congress. He was the father of Kenny Inouye, the guitar player in the DC hardcore punk band Marginal Man.

Inouye also served in the 442nd Regimental Combat Team—a unit made up almost entirely of Japanese Americans who wanted to show allegiance in the face of internment—during World War II. (The team went on to become the most decorated infantry regiment in US Army history.) He is probably best known for this one time in which he killed throngs of Nazis in a manner closely resembling the climactic scene in the movie The Wild Bunch. But unlike the protagonists in The Wild Bunch, he somehow made it out alive at the end.

Here’s an excerpt from a Hawaii Reporter piece, which details how a young Inouye responded to getting his arm blown off by Germans during a firefight in Italy:

On April 21, 1945, Dan’s company was ordered to attack a heavily defended ridge guarding an important road in the vicinity of San Terenzo. His platoon wiped out an enemy patrol and mortar observation post and reached the main line of resistance before the rest of the American force. As the troops continued up the hill, three German machine guns focused their fire on them, pinning them down. Dan worked his way toward the first bunker. Pulling out a grenade, he felt something hit him in his side but paid no attention and threw the grenade into the machine-gun nest. After it exploded, he advanced and killed the crew.

Dan continued up the hill, throwing two more grenades into the second gun emplacement and destroying it before he collapsed from loss of blood from his wounds. His men, trying to take the third bunker, were forced back. He dragged himself toward it, then stood up and was about to pull the pin on his last grenade when a German appeared in the bunker and fired a rifle grenade. It hit Dan in the right elbow and literally tore off his arm. He pried the grenade out of his dead right fist with his other hand and threw it at the third bunker, then lurched toward it, firing his tommy gun left-handed. A German bullet hit him in the leg. A medic reached him and gave him a shot of morphine. In his typical stoic manner he didn’t allow himself to be evacuated until the position was secured. In the hospital, the remnants of his right arm were amputated.

The attack concluded with 25 dead German soldiers, and eight others captured.

Here is Inouye in his own words:

When my platoon members told me [about what I had done], I said, ‘No, it can’t be. It can’t be. You’d have to be insane to do all that.’ I think it’s all part of the training where you do things almost automatically. It’s a sense of duty. That’s what they told me, and the company commander who was also observing from the backside, he said, ‘I couldn’t believe what I saw, because you were a crazy man.’ 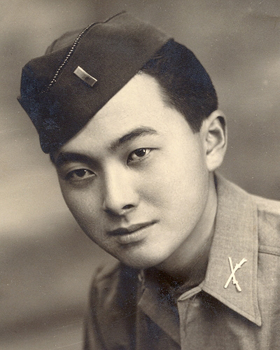