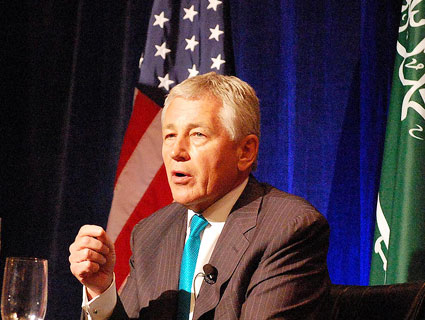 GOP ex-Sen. Chuck Hagel is reportedly near the top of the list of candidates for Secretary of Defense.<a href="http://www.flickr.com/photos/newamerica/3483372882/sizes/z/in/photostream/">New America</a>/Flickr

Former Senator Chuck Hagel (R-Neb.), reportedly President Barack Obama’s top choice to replace Leon Panetta as defense secretary, has come under fire from the right for mildly criticizing Israel and from the left for offensive remarks about a gay Clinton appointee in 1995. (He’s since apologized for his comments about the Clinton nominee.) But despite the fact that Hagel repeatedly voted to limit access to abortion for American servicewomen stationed abroad—votes in direct opposition to the Obama administration’s current stance—women’s rights groups aren’t piling on.

“His overall record on the question of legal abortion is bad,” says Donna Crane, policy director of NARAL Pro-Choice America, a leading abortion rights group. But NARAL believes “President Obama’s views on this issue would prevail if Hagel were appointed.”

During his twelve years in Congress, Hagel was an ardent opponent of abortion rights, racking up an average 94 percent rating from the National Right to Life Committee. When first running for Senate, in 1995, he took a hard line against abortion rights, saying he didn’t believe exceptions for rape or incest were necessary because, he said, so few pregnancies were involved. “As I looked at those numbers,” Hagel told the Omaha World Herald, “if I want to prevent abortions, I don’t think those two exceptions are relevant.”

As Defense Secretary, Hagel wouldn’t be in charge of carrying out domestic policy. But America’s abortion wars haven’t spared the US military. For forty years, anti-abortion forces have sought to restrict abortion access for women service members. Hagel was part of that effort. He voted six times, most recently in 2003, to prevent American servicewomen from using their own money to pay for abortions at military facilities abroad. That policy drastically limited servicewomen’s options, especially since many countries where the military is stationed forbid abortion. Some women were forced to continue unwanted pregnancies or had to return home to obtain abortions, putting their careers at risk.

Thanks to an amendment to the 2013 defense bill sponsored by Senator Jeanne Shaheen (D-N.H.) and supported by Obama, military insurance will soon cover abortions for women service members who are raped. Remember, Hagel said during his first campaign for Senate that exceptions to allow legal abortions in cases of rape aren’t necessary. When Shaheen’s amendment becomes law, Defense Department health insurance—which is paid for with taxpayer money—will cover abortions in cases of rape and incest. Abortions for rape victims won’t just be legal—they’ll be covered by the government. That means, as defense secretary, Hagel would be responsible for overseeing and implementing a policy that goes beyond policies he opposed as a senator.

There’s reason to believe that some servicewomen will use the new abortion coverage provided under the Shaheen amendment. Most servicewomen will face an unplanned pregnancy, and sexual assault in the military has been on the rise in recent years, including in combat areas. Eighty eight percent of service members targeted for sexual assault last year were women. Until recently, the defense department would only pay for abortions if the woman’s life was in danger.

Given the passage of the Shaheen proposal and Obama’s own views on abortion, however, women’s groups believe that if Hagel were appointed, his anti-abortion views wouldn’t hurt women service members.

“President Obama’s opinions on legal abortion are very clear and very strong, and his views on this specific issue are equally clear,” Crane says. “[Hagel] would be serving at the pleasure of the president as every cabinet secretary does, and would be carrying out the policy views of his boss.”

Planned Parenthood took a similar view. “Any Secretary of Defense nominee should be expected to fully implement the law of the land and support the President’s positions,” Dana Singiser, a lobbyist for Planned Parenthood, said in a statement to Mother Jones. “We’ll be watching closely to make sure that is the case.”