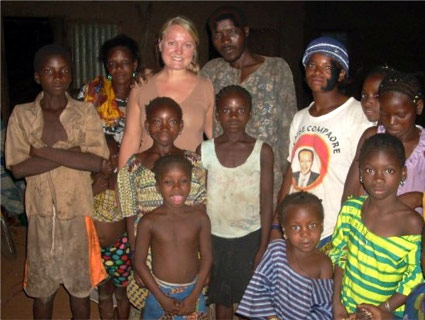 In the spring of 2009, Christie-Anne Edie contracted a nasty parasite in Burkina Faso, where she was teaching family-planning and sexual health for the Peace Corps. Her gastrointestinal infection was so severe that the Peace Corps had her medically evacuated to Washington D.C., and eventually flown back home to Colorado months later in December.

And that’s when her nightmare began.

Incredibly sick and without insurance, Edie was initially assigned a field nurse to file her workers’ compensation claims with the Department of Labor. But when her field nurse was abruptly removed from her case, Edie had to navigate the agency’s labyrinthine bureaucracy on her own. Since 2010, Edie has accumulated more than $25,000 in unpaid medical bills. The labor department has rejected her claims for reasons varying “from incorrect billing codes to procedures…not related to accepted diagnosis codes,” Edie says.

“I just feel like I have been abandoned by Peace Corps,” says one former volunteer.

Meanwhile, Edie says the labor department hasn’t returned any of her calls or letters, and collection agencies are hounding her.

“I have sacrificed not only my time and my energy for Peace Corps service, but I’ve sacrificed my health and my finances and my credit and basically my entire life,” Edie said in an interview. “I just feel like I have been abandoned by Peace Corps.”

Edie’s story is far from unique: According to a new investigation by FairWarning, Peace Corps volunteers like Edie, many of whom face sexual assault, injuries, trauma and exotic diseases in developing countries, often fail to receive appropriate medical care and disability payments from the Federal Employees’ Compensation Act (FECA), the government’s workers’ compensation program.

In interviews with more than a dozen former Peace Corps service members, FairWarning found that many volunteers “failed to gain government-paid medical care when they returned to the U.S. because they couldn’t find doctors registered with FECA. What’s more, they say, claims for medical insurance reimbursements often bog down or are rejected because of bureaucratic bottlenecks and the lack of information provided to volunteers.”

A Government Accountability Office (GAO) report published last month blamed both the Peace Corps and Department of Labor for failing to “work together to use available information to monitor the accessibility and quality of FECA benefits for volunteers.”

Although FairWarning notes that Peace Corps officials have acknowledged flaws in the system, this isn’t the first time the organization has come under fire for failing to support its volunteers at home. According to FairWarning, in 1991, GAO found (PDF) the Peace Corps Post-Service Unit’s officers “often were unable to answer volunteers’ questions about FECA. Many returned volunteers weren’t even told they were entitled to health care benefits.”

Read the full story at FairWarning.org.