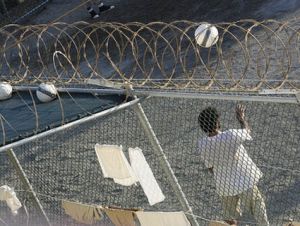 President Barack Obama has threatened to veto the 2013 National Defense Authorization Act if the final version includes certain provisions, including continuing restrictions on Guantanamo Bay detainee transfers that make it impossible for the administration to close the prison. The statement was issued Thursday, as the Senate debated the defense bill.

Legislators should be forgiven for not taking this threat too seriously.

Obama reiterated his intention to close the Guantanamo detention camp on Jon Stewart’s Daily Show just prior to the 2012 election. But Congress has hemmed him in with those transfer restrictions, and bringing suspected terror detainees to US soil is even less popular than it used to be.

Civil liberties and human rights groups have urged Obama to veto the defense bill if it retains the transfer restrictions, since they would make it impossible for Obama to fulfill his promise to close Gitmo. It’s also the only way for the administration to convince Congress that it’s actually serious when it says the restrictions are unacceptable.

But they probably aren’t serious, at least not if we’re defining “seriousness” as being actually willing to veto the bill. Not if the past is any indication.