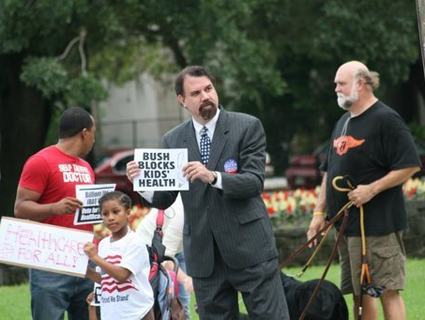 Alan Grayson, the bomb-throwing Florida Democratic congressman who was tossed out in the tea party wave of 2010, is going back to Washington. After moving to the newly drawn, deep-blue 9th congressional district after redistricting, Grayson is easily topping his Republican challenger, lawyer and perennial candidate Todd Long, by double digits.

Grayson, who served just one term in Congress before losing to GOP Rep. Dan Webster, carved out a reputation in Washington as a progressive capable of exploding at any moment on nearly any issue. Among other things, Grayson said that former Vice President Dick Cheney has blood “dripping from his teeth,” called a female lobbyist a “K-Street whore,” said Rush Limbaugh was “more lucid when he was a drug addict,” and warned “Republicans want you to die quickly if you get sick.”

But if you expected Grayson to tone down his act during his two years in the wilderness, you obviously don’t know anything about Alan Grayson. On Sunday, he wrote on his Facebook page that, “Sometime between now and Tuesday, they’ll say that an Obama victory means the Mayan Apocalypse, 45 days later, and only Mitt Romney/Todd Long/whoever can save us from that. They just keep pushing that big, red PANIC button, over and over and over again.”

Grayson’s bombast could be exhausting at times, but as my colleague Andy Kroll noted in 2010, he was also a voice for issues even Democrats tended to ignore:

In the recent foreclosure debacle, which introduced regular Americans to “robo signers” and “foreclosure mills,” Grayson was a leading voice demanding investigations and highlighting the most glaring problems with the foreclosure pipeline. His pressure, combined with dozens of other members of Congress, helped to spur a nationwide probe involving by all 50 state attorneys to scrutinize into banks’ alleged wrongdoing in the foreclosure process.

If GOP Rep. Allen West holds on to win, Florida can probably lay claim to the two members of Congress most hated by the other side.