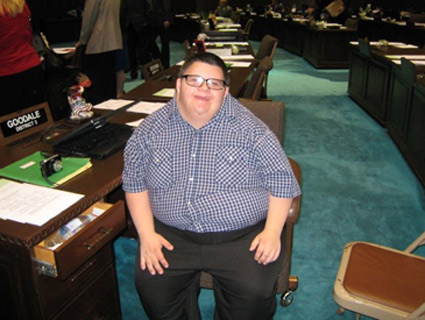 Three months ago, Clinton Gode testified before an Arizona probate judge, explaining how he got his news, why he wants to vote in tomorrow’s election, and which presidential candidate he prefers.

The judge asked if people ever try to tell him how to vote. “Yeah,” Gode replied, “But I don’t listen to them.”

That was a fine answer. After a half an hour of this line of questioning, Judge Lee Jantzen of the Mohave County Superior Court banged his gavel and granted Gode the right to vote.

Gode, who is 25, has Down syndrome. When he was 18, his parents became his legal guardians so they could manage his medical and financial affairs, which disqualified him from voting in Arizona. Now, Gode will cast a ballot on Tuesday thanks to a new state law that allows people with court-appointed guardians to petition for and restore their suffrage if a judge determines “by clear and convincing evidence” that they have “sufficient understanding to exercise the right to vote.”

House Bill 2377 passed overwhelmingly in the Arizona Legislature last April, with Gode as its official spokesperson. It was lauded as a compromise between Republican lawmakers and disability advocates, who had been fighting for more than a decade to enfranchise Arizonans under guardianship.

Arizona is one of 14 states that categorically bar people who are under guardianship or are judged to be mentally “incompetent” or “incapacitated” from voting, according to the Bazelon Center for Mental Health Law. Although all but 11 states have disability-related voting restrictions, laws that impose uniform bans on people who are under guardianship or judged to be incompetent disproportionately target adults with disabilities or mental illness, including veterans with traumatic brain injury, seniors with dementia, and people with autism.

These laws are “inherently biased” and violate constitutional guarantees of equal protection and due process, says Lewis Bossing, a senior staff attorney at the Bazelon Center. They’re “based on a faulty stereotype” that “people with mental disabilities can’t make decisions, don’t have a preference in a political issue or among political candidates, or can’t express that preference in a way that is reliable.”

Laws that block disabled people from voting are “based on a faulty stereotype” that they “can’t make decisions, don’t have a preference in a political issue or among political candidates.”

Supporters of voter competence requirements say these measures are necessary to prevent voter fraud. They worry that caregivers or poll workers could improperly coerce vulnerable adults to vote a certain way. Minnesota State Rep. Mary Kiffmeyer made a similar argument earlier this year. The Republican lawmaker, who is also spearheading her state’s voter ID amendment, sponsored a bill in February to limit the voting rights of Minnesotans under guardianship. Kiffmeyer, who is the legal guardian of her disabled sister, cited a 2010 incident in which a group of adults with mental disabilities allegedly cast ballots with improper assistance from their caregivers. An investigation into the allegations turned up no evidence of illegal voter manipulation.

After Kiffmeyer’s bill stalled, a group of conservative activists took up her cause as part of a wide-ranging federal lawsuit to ensure that ballots cast by ineligible voters, such as felons and wards of the state, aren’t counted. The case was dismissed in August; the plaintiffs have filed an appeal.

The new Arizona law isn’t a perfect solution for people like Gode. Studies show that people with disabilities are often sidelined from the political process. In 2008, 46.1 percent of people with disabilities voted, compared with 64.5 percent of their fellow non-disabled citizens. Voter ID restrictions also pose an undue burden on them because securing proper documentation can be expensive and impractical. Inaccessible polling places also keep disabled voters from casting their ballots. And even when people with disabilities do get their voting rights restored, they must jump through legal hoops like those Gode did. “This is a barrier to voting most people don’t face,” says Bossing.

For disability advocates, measures that make political participation harder for people with disabilities are particularly troubling with the future of Medicaid at stake. More than 44 percent of people with disabilities depend on Medicaid. Mitt Romney has promised to repeal the Affordable Care Act and turn Medicaid into a block grant program run by the states. “Block grants would end up pitting children who need health care against older individuals who want to say in their homes against people with disabilities who want to live in communities.” says Bruce Darling, president of the Center for Disability Rights. “It’s going to be a terrible game of who’s going to be able to make their case and who has the most political power.”

Clinton Gode has seen what happens when publicly funded programs are squeezed dry. A year and a half ago, state budget cuts forced him to move out of his group home in Kingman, Arizona. “I was in a group home and my house [was] not doing so good for money-wise,” Gode recalls. “And then somebody came in and…said to me, ‘You need to move out because budget cuts.'”

That’s why Gode is voting on Tuesday. “Budget cuts affect everybody,” he says. With the help of his parents, Gode found a studio apartment run by a local nonprofit in Lake Havasu City.

On Tuesday, his parents will drive him to his polling place, where he’ll cast his vote for the presidential candidate he hopes will help him and his friends continue to live as independently as possible. “I have been reading about Barack Obama,” he says. “I want to vote. I’m really, really happy I vote right now, and I’m so excited.”