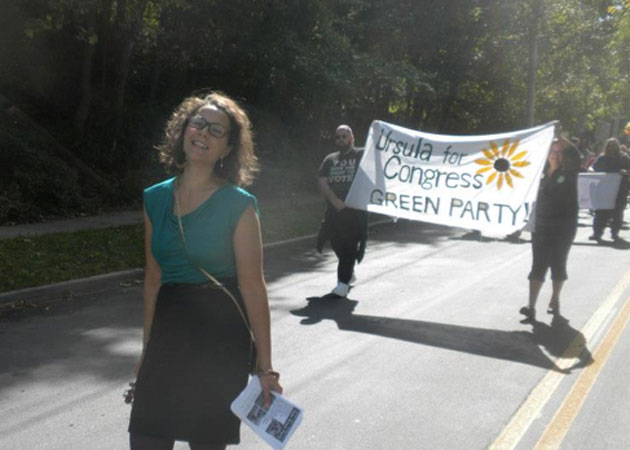 A nose-ring-wearing, bike-fixing, chore-sharing 28-year-old could decide one of the most expensive and closely watched congressional races in the country.

Ursula Rozum is running on the Green Party ticket in New York’s 24th District, an upstate region that includes Syracuse. Dan Maffei, a Democrat who lost his seat by several hundred votes in 2010, is hoping to take it back from Republican Ann Marie Buerkle. Polling shows the race is razor tight. That means a few extra lefty votes for Rozum could Nader-ify the contest and deliver the seat to Buerkle. And New Yorkers aren’t the only ones who are hip to this reality. A family of rich Republicans from Florida, who may be rooting for this very scenario, recently sent thousands in friendly campaign cash Rozum’s way.

Rozum is a staff organizer for the Syracuse Peace Council and lives at the Bread and Roses Collective, a group house whose residents commit to social-justice activism, gardening, chore- and meal-sharing, and bike fixing. They do not run around naked or do drugs, she told the Syracuse Post-Standard.

Rozum has been visiting college campuses and holding rallies, handing out “Voting Green Is Sexy” stickers, and talking about climate change, job creation, student debt, cutting defense spending, and legalizing marijuana. And her message seems to be getting through: People are jumping on board her “commie lib” train. In the latest polls, Rozum had 7 percent of the vote, and Maffei and Buerkle were tied at 43 percent, with 7 percent undecided.

Buerkle, naturally, has welcomed Rozum’s presence in the race. In recent months, the GOP incumbent invited both her opponents to participate in four town-hall-style forums put on by her campaign. Maffei’s campaign declined, telling Mother Jones the events were more like “campaign rallies for her.” But Rozum accepted, upping her name recognition and potentially damaging Maffei further. (The three candidates have also appeared in actual televised debates together.)

The contrast between the major-party campaigns and Rozum’s operation is striking. Buerkle and Maffei have raised nearly $4 million for what has become the most expensive congressional race in central New York history. Rozum has raised about $7,800, largely from individuals, plus $1,000 from the New York State Green Party. She says most of it has has gone to printing campaign literature (“black and white to save money”) and snacks for volunteers. A recent uptick in donations allowed the campaign to buy $4,600 worth of TV ads in the area last week, a rarity for Green candidates.

Last week, the plot thickened further. Rozum received large unsolicited contributions from a wealthy Florida family, according to the Post-Standard. Carolyn Grace, a homemaker, gave $2,500, and her three children together gave $1,750. The Graces are also donors to Buerkle, and to Karl Rove’s American Crossroads.

Giving to Green party candidates in close races is nothing new for the Graces. In 2004, according to the Hartford Courant, Carolyn’s husband, Oliver Grace Jr., a Wall Street investment banker, gave $1,000 to the Green Party, and the same amount to the Swift Boat Veterans for Truth. All of this fits into a proud tradition of GOP lefty love. In the summer before the 2004 election, nearly 1 in 10 of Ralph Nader’s major donors had recently given to the Bush-Cheney campaign.

Unlike Nader, Rozum got rid of the GOP money. She held a press conference last week in which she wrote checks with the Graces’ money to a bunch of community organizations and voter advocacy groups.

Maffei’s campaign manager Clay Schroers said that “the situation speaks for itself,” and that “Dan believes Ms. Rozum did the right thing.” (The Buerkle campaign has denied any involvement in the shenanigans.)

What does Rozum say to the charge that she upset the race? “We have a very antiquated and horrible electoral system and it makes people go crazy,” she told Mother Jones. “People are saying it’s a vote for Ann Marie, when it’s a vote for me.”