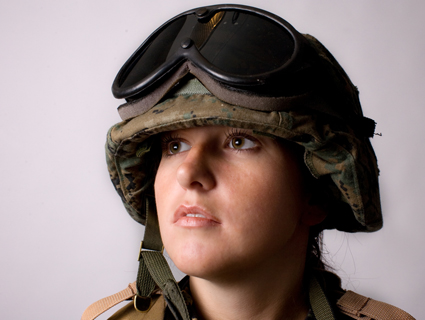 Four female service members are suing Secretary of Defense Leon Panetta over the military’s exclusion policy for women in combat roles. Backed by the American Civil Liberties Union and the Service Women’s Action Network, the women argue that the policy has created a “brass ceiling” that prevents them advancing as far as their male colleagues.

They also note that the policy does not fit the modern military, where women are often sent out into combat and performing the same jobs as male colleagues, without the ability to formally advance. “The modern battlefield means there are no frontlines or safe zones,” said Capt. Zoe Bedell, 27, who serves in the US Marine Corps Reserves. “The combat exclusion rule does not recognize that reality.” Bedell, who served in Afghanistan, said that women in her unit patrolled with men and carried the same equipment as men, even if they were formally barred from serving in combat units. She said she left active duty for the reserves because the combat exclusion policy “limits my future in the Marine Corps.”

Current Dept. of Defense policy prohibits women from being assigned to units below the brigade level that engage in direct ground combat. In February 2011, the DoD announced a rule change that opened 14,000 more jobs to women in the military, but another 238,000 positions are still off-limits. That change “falls short,” said Ariela Migdal, a senior staff attorney with ACLU’s Women’s Rights Project. “It just does a disservice to women who have put their lives on the line to say we’re going to make some changes around the edges.”

This suit is separate from a previous case filed in May on behalf of two Army reservists who said that the rule limited their ability to advance. The ACLU’s Migdal said that their suit is intended to “demand that DOD bring policy in line with the rest of society, and with the realities of the modern military.”