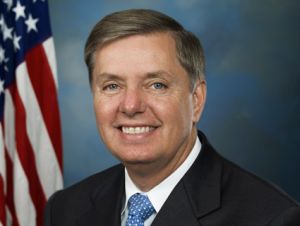 Sen. Lindsey Graham (R-S.C.) is not happy that the government might have to actually convict a suspected terrorist of a crime before locking them up forever and throwing away the key. So he’s working on an amendment to the pending defense bill that would make it clear that if the government thinks you’re a terrorist, it can put you in prison without ever having to prove beyond a reasonable doubt that you so much as vandalized a dive bar bathroom wall.

The text of the amendment, which is circulating on the Hill but has not yet been formally introduced, would affirm the government’s power to “detain under the law of war” any individual “who joins al-Qaeda, the Taliban, or an associated force” and “plans or participates in a belligerent act against the United States on behalf of such forces anywhere within the United States and its territories.” In other words, you could be deprived of your freedom in a war with no definable end, based on the mere suspicion that you’ve committed a crime. During the debate over last year’s defense bill, Congress agreed to leave open the question of whether or not military detention authority applied to US citizens apprehended on American soil. This amendment would ensure that it does.

The amendment is a response to the one proposed by Sen. Dianne Feinstein (D-Calif.) and Sen. Mike Lee (R-Utah) that would prevent the government from detaining Americans and legal permanent residents suspected of terrorism without charge or trial. That amendment wouldn’t protect all non-citizens apprehended on US soil however, so civil liberties and human rights groups are opposing it as unconstitutional. “Any approach to dealing with indefinite detention should be consistent with basic constitutional principles, which say that all persons are guaranteed due process,” Human Rights First’s Raha Wala said in a statement emailed to reporters.

Instead, these groups are backing amendments from Sen. Mark Udall (D-Colo.) that would ensure that any person—citizen or otherwise—apprehended on US soil could not be deprived of their freedom without due process of law. You know, like it says in the Constitution.