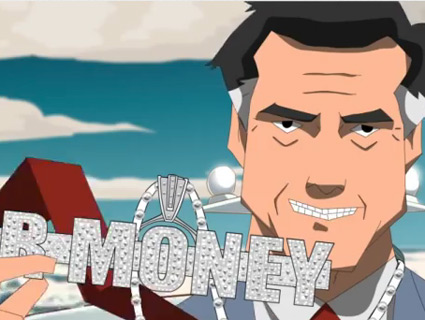 Happy Election Eve! NOW EVERYBODY CALM DOWN. New polling data shows at least half of us will be bitterly disappointed with the outcome. Meanwhile, a full 100 percent are grappling with fear of the unknown. So to pass these nailbiting hours, we’ve compiled a playlist of original songs inspired by our presidential candidates. This year, however, they’re all about Mitt—for or against—and by and large, “invariably fucking awful” in the words of my editor.  (An aside: In ’07-’08, Obama had lyrical endorsements from Jay-Z and Mary J. Blige, Common and Young Jeezy. Today, Romney has this guy. A sign of the times?)

So crack a cold one, America. Take a swig. We’ll make it through this election, although maybe not this playlist.

1. Devo, “Don’t Roof Rack Me, Bro!”: Remember that time Romney drove 12 hours to Canada with his Irish setter stuffed inside a pet carrier strapped to the top of the family car? Yeah, I wanted to forget about one of the more irreverent and distracting political memes of the election cycle, too, but thanks to iconic New Wavers Devo, Seamus’s plight will live on in pop-political music commentary forever.

Best line: “Seamus, Seamus please come back. / Your master’s pigged-out on super-PACs. / If he was honest and told the truth, / he’d go to jail for what he did to you.”

2. The Key of Awesome, “Hot Problems”:  To quote NME, this satirical take on Romney’s robotic, uh, personality is “the best parody of the worst song ever.” (Apologies for the link.)

Best Line: “I know what it’s like when times get bad. / And you have to borrow a yacht from your dad.”

3. William Tapley, “Mitt Romney, A Hero In My Mind: Meet William Tapley, also known as “the Third Eagle of the Apocalypse” and the “Co Prophet of the End Times.” He hosts a show on YouTube called “Revelation Unraveled,” where he answers tough questions like, “Will you be raptured or captured” if you use condoms? He’s interested in poetry, music, and sculpture. He believes the Denver International Airport is full of subliminal penises. And he wrote this song about Mitt Romney.

Best Line: “World War Three / That’s Obama’s plan for you and me.”

4. ADHD, “Where You Hide Your Money”: In this NSFW for parody of Ol’ Dirty Bastard’s 1999 single “Got Your Money,” Romney fulfills his evolutionary destiny, apparently, as a slippery-slimy, bad-ass mofo awash in cash, women and semi-automatics. Big Bird, beware.

Best Line: “If you elect me President Romney / then prepare to lift your skirt. / And if you think my flip-flops aren’t comedy / look at my hair and shut yo’ ass.”

5. Lil Wayne and Nicki Minaj, “Mercy”: In September, Nicki Minaj shocked bored journalists everywhere with what sounded like a profanity-laced lyrical endorsement for the Republican candidate on Lil Wayne’s Dedication 4 mixtape. Turns out, though, she was totally trolling. She later tweeted: “Ha! Thank you for understanding my creative humor & sarcasm Mr. President, the smart ones always do…”

Best Line: “I’m a Republican voting for Mitt Romney. / You lazy bitches is fucking up the economy.”

6. Blake Tyler Mason, “The Mitt Romney Song”: Here, a wholesome Marky Mark sings an earnest, auto-tuned endorsement of the candidate he believes will heal and purify our sick and sin-stained world: “Babies stop dying. / Marriage stays Holy / And won’t be a joke.”

7. Kanye West, “To the World”: In the first track of Kanye West’s Cruel Summer G.O.O.D Music compilation album, the rapper takes a swipe at the GOP nominee for refusing to make public his tax returns. The song was leaked shortly after Minaj revealed that her “I’m voting for Mitt Romney” line was—surprise!—a joke. “All of which means,” as Slate writes, “Mitt Romney isn’t likely to carry the hip-hop vote” on Tuesday.

8. Republicans, Independents, Democrats of all ages for Romney/Ryan!, “All My Trials, Lord”: Posted without comment.

9. Roy Zimmerman, “Song of Mitt Romney”: Singer-songwriter-satirist Roy Zimmerman gives away his joke in the first line of his acoustic ode to the Republican candidate: “Some say Mitt Romney…He is tone deaf.” What follows is some good, clean, and fun political mockery—if you can tolerate three minutes of off-key yodeling.

Best Line: “Some say Mitt Romney is an android. / That he’s Bob Dole, only boring.”

10. College Humor, “Mitt Romney Style”: I know. No, really, I KNOW. The Internet needs no more “Gangnam Style” parodies, but this College Humor one would make the cut for its high-quality production value alone. What’s more: Mother Jones’ 47 percent video is hat-tipped at 0:54. Later, a Paul Ryan look-alike air-humps a bellboy attending to an old lady with a walker.

BONUS: Epic Rap Battles, “Barack Obama vs Mitt Romney”: Still haven’t decided whom you’re voting for? Get your finger out of your nose and watch this decent Obama impersonator and this mediocre Romney one thrown it down in faux-freestyle rap. Because if you still haven’t made up your mind, perhaps even two men posing and posturing for political spectacle will sway you. (Also check out our “Undecided Voter Playlist.”)