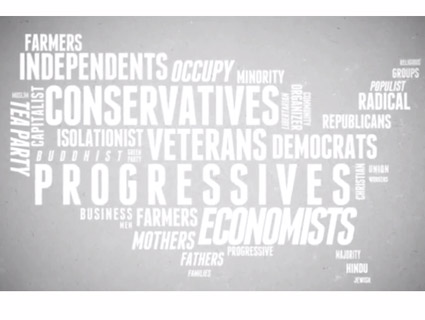 The 2012 election wrapped up barely a week ago, which means that fundraising for the 2014 midterm election has begun in earnest. But a new campaign to get money out of politics has just launched as well. Represent.Us says its goal is to pass the American Anti-Corruption Act, a nine-point plan to crack down on lobbyists, strengthen the flimsy law intended to prevent super-PACs from coordinating with campaigns, and put a stop to undisclosed donations funneled through dark-money nonprofits. (Represent.Us is a project of United Republic, a campaign finance reform group that, like many of the outside spending organizations it takes aim at, is a 501(c)(4).)

Represent.Us boasts a high-profile, bipartisan board of advisors, among them former Federal Elections Commission chair (and Stephen Colbert’s “personal lawyer”) Trevor Potter, Lawrence Lessig, disgraced lobbyist-turned-reformer Jack Abramoff, representatives from Occupy Wall Street and the DC Tea Party Patriots, and even Teddy Roosevelt’s great-grandson, Theodore IV. The group hopes to to convince 1 million American citizens to join its cause, building on popular revulsion to what it deems “the worst political corruption in American history.”

After that, Represent.Us plans to introduce the Anti-Corruption Act to Congress by the end of 2013 and rally cosponsors. It’s also got its eye on 2014: The group says it will wage a “hard-hitting campaign” against members of Congress who fail to sign on. No word yet on how it would fund its efforts to unseat those incumbents.

Here’s the group’s call to action: