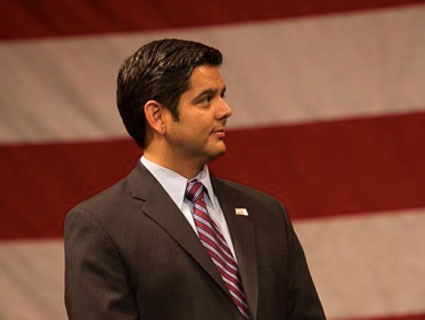 The race in California’s 36th congressional district shouldn’t have been close. Republican Rep. Mary Bono Mack hung onto the seat for six terms (after gaining it in a special election when her husband Sonny Bono, who had previously held the seat, died). Her Democratic opponent, emergency room physician Raul Ruiz, is a political neophyte; plus he was recently confronted with a politically unsavory bit of his past: a tape of him reading a letter of support of Leonard Peltier, a Native American convicted of murdering two FBI agents in 1977.

But Ruiz won, by three percentage points, after counting went into overtime last night and today.

The district, which includes Riverside County and Coachella Valley, was reconfigured this year and now officially has more Democrats than Republicans. Almost half of the district’s residents, and about a quarter of its voters, are Hispanic. Apparently these folks were not fond of Bono Mack’s Romney-ish positions and style.

Bono Mack recently received a “zero” rating in a study that scored members of Congress on how they vote on the interests of the middle class. Mack voted for the Ryan budget, to extend the Bush tax cuts, and to gut the Consumer Financial Protection Bureau. In 2006, she characterized the neighborhoods of some of her constituents as a “third world toilet,” agreeing with a local talk show host’s description. She has also voted against employees’ rights to organize, and believes Obamacare is too costly.

Ruiz supports the Affordable Care Act, and Obama’s plan to cut Medicare costs, not by voucherizing, but by allowing the program to negotiate for lower drug prices and cutting fraud. He wants federal dollars to help underwater homeowners, and to promote new industries like health care research and green energy. Like Obama, Ruiz calls for a 30 percent tax on millionaires.

Ruiz’s campaign withstood some brutal attacks by Bono Mack. Her campaign leaked information to The Desert Sun on Ruiz’s arrest during in his med school days—on a disorderly conduct charges during a “Day of Mourning” protest of Thanksgiving (the charges were dropped). Then came that tape in support of Peltier.

But the attacks didn’t work. Neither did the money. Mack had about a quarter more cash than Ruiz, not factoring in outside spending from groups like Karl Rove’s American Crossroads GPS. Ruiz received more than twice as much as Bono Mack from small contributors.

As the son of farmers from Coachella Valley, Ruiz’s personal story jibes with that of many of his constituents. “I’m not a politician,” he told the Press-Enterprise in October. “I’m a citizen candidate who really listens and respects this district. The momentum is definitely on our side.”