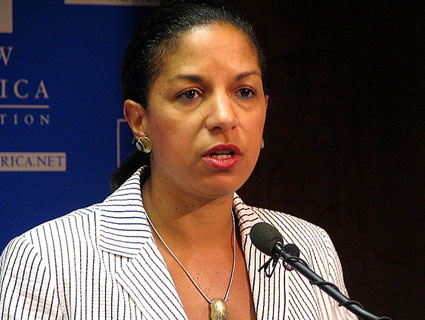 Susan Rice, thought by many to be Obama’s No. 1 pick for secretary of state, holds millions of dollars in investments in Canadian oil companies and banks with stakes in the  $7 billion Keystone XL Pipeline, according to a piece out today from OnEarth, a magazine published by the environmental advocacy group Natural Resources Defense Council. As head of the State Department, Rice would have ultimate authority in determining the fate of the pipeline, which would link northern Alberta’s remote oil sands fields to Texas’ Gulf Coast refineries.

The piece reveals that Rice has significant holdings in more than a dozen Canadian oil companies and banks that would benefit from the growth of the Canadian tar sands industry and the construction of the controversial pipeline. OnEarth‘s Scott Dodd finds that nearly a third of Rice’s personal net worth—estimated in 2009 to be between $23.5 million and $43.5 million—is invested in Canadian oil producers, pipeline operators, and other energy companies, including several with egregious environmental records on both sides of the border. Financial disclosure reports further show that Rice has between $300,000 and $600,000 invested in TransCanada, the company that is seeking the permit from the State Department to build sections of the pipeline from Oklahoma to the Canadian border.

“It’s really amazing that they’re considering someone for Secretary of State who has millions invested in these companies,” Bill McKibben, founder of the activist groups 350.org and Tar Sand Action, which have organized protests against the Keystone XL project, told OnEarth.

The decision on whether to build the pipeline was delayed in 2011 when the State Department ordered a review of alternate routes to avoid cutting through an ecologically sensitive section of Nebraska. This saved Obama the political cost of having to make a decision on the controversial project in an election year. The Keystone XL decision could be one of the first tasks of the new secretary of state in 2013.

To read OnEarth‘s full story, click here. To see a larger version of the document below, click here.