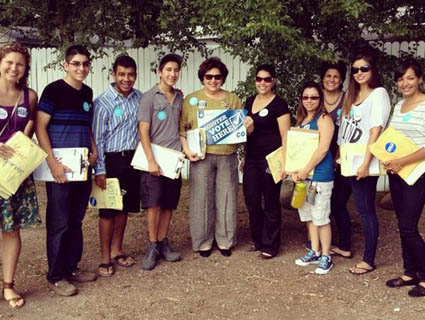 President Barack Obama defeated Mitt Romney by assembling a coalition of unprecedented diversity—in an electorate that was 72 percent white, 44 percent of Obama voters were not. But in the dull lexicon of Washington political reporters, a rich, NPR-listening white liberal remains the favored stereotypical shorthand for a Democratic voter.

For example, in an otherwise interesting piece about the right’s media bubble, Politico describes Obama’s coalition as more ominvorous in its media appetites because “there are as many, if not more, NPR-oriented liberals as MSNBC devotees on the left; the Democratic media ecosystem is larger and more diverse.” So when summing up the media appetites of the most diverse electoral coalition in American history, Politico‘s two examples are liberals who watch NPR and liberals who watch MSNBC. That’s when they’re being polite. If they’re trying to affect a derisive tone they might go with “the coffee-drinking NPR types of Seattle, San Francisco and Madison, Wis.”

The NPR stereotype itself is overblown—liberals make up 36 percent of the NPR audience, while 39 percent consider themselves moderates and 21 percent conservatives. NPR’s audience is more highly educated than the country as a whole, but the candidate who won Americans without a college degree was Barack Obama. In real life, NPR’s journalism just also isn’t liberal.

More importantly, the notion that people with liberal or left-of-center views are all NPR devotees is a right-wing meme the mainstream media has mindlessly parroted for years. I suspect why this happens because the upper-middle-class liberals in the DC metro area are the Obama voters Beltway reporters frequently come in contact with. That’s why much of the national media’s image of the quintessential Obama voter remains some yuppie with a taste for gourmet coffee. There is no room in that political shorthand for the retired black Marine in Ohio who knocked on doors for the Obama campaign, or the Latina mom who stood in line for hours—at three different times—just to be able to cast a ballot. The working-class people of color who now make up much of the base of the Democratic Party often seem as invisible to political media as they were to the Romney campaign, which the New York Times described as being shocked that the Obama operation turned out “voters they never even knew existed.”

You can almost understand the Romney campaign’s surprise. The national media doesn’t talk to these voters much—they work hard and play by the rules but were never the group that politicians used to refer to as “working hard and playing by the rules,” because before Obama, only white people were described that way. Political consultants never refer to them in cute, condescending shorthands like “soccer moms” or “NASCAR dads.” They may drink beer, but they’re never the folks who the reporters mean when they talk about “Joe Sixpack.” They drive our buses, care for us when we’re sick, clean our hotel rooms, teach our children, cook our meals, answer our noise complaints, and much more. Their political views aren’t discussed or explored so much as summed up as a matter of “demographics,” as though their votes were settled by genetics rather than individual agency. They are the new “flyover country,” except they’re not so much flown over as invisible to the people who rely daily on their labors. The political press often lacks the vocabulary to describe them, and until last week they could be safely disregarded.

That’s no longer true. But a political press used to communicating the soul of America in tired metaphors meant to paint a superficial portrait of a certain kind of working-class white voter from the South or Midwest is ill-equipped to tell you about them. References to NPR and lattes won’t cut it, not that they ever did.