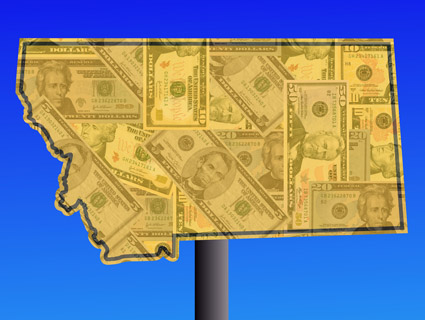 This story also appears on the website of the Center for Public Integrity.

American Tradition Partnership, a pro-energy group known for successfully suing Montana to force it to abide by the US Supreme Court’s Citizens United ruling, has also sued the state to protect the identity of its donors—who have funded the ATP’s attack mailers in state races.

An IRS document obtained by the Center for Public Integrity indicates one of its early donors was a nonprofit 501(c)(4) called Coloradans for Economic Growth, which spent millions of dollars from undisclosed sources to support a failed 2008 ballot initiative that would have made Colorado a “right-to-work” state.

Among the initiative’s supporters was Jacob Jabs, president and CEO of American Furniture Warehouse. A 2008 letter to the IRS signed by former ATP employee Athena Dalton said Jabs was the “primary donor” and had promised to give $300,000 to ATP, but only if the IRS expedited its approval of ATP’s application for tax-exempt status.

Jabs has denied knowing anything about the group or giving it any money.

ATP’s 2008 donors list shows a $300,000 contribution from Coloradans for Economic Growth, but makes no mention of any donation from Jabs.

Dalton did not return numerous calls. According to a report by ProPublica, a nonprofit investigative news organization, Jabs said he contacted Dalton earlier this October and she told him that ATP officials had instructed her to use Jabs’ name in the letter.

One of those officials was Christian LeFer, who was also director of Montana Citizens for Right to Work at the time. LeFer declined to comment on whether he told Dalton to use Jabs’ name or not.

In a previous interview with the Center, LeFer said that “ATP and RTW [Right to Work] have nothing to do with each other,” and that “I know of no shared funds” between the groups.

An IRS document indicates one of ATP’s early donors was a nonprofit that spent millions of dollars from undisclosed sources to support a ballot initiative that would have made Colorado a “right-to-work” state.

Donald Ferguson, ATP’s spokesman, did not respond to a request for comment.

Coloradans for Economic Growth was a major force behind the state’s anti-union ballot initiative, shelling out almost $3.4 million in 2008 to groups that campaigned for the law’s passage.

Such laws, which exist in 23 states, allow employees at union shops to forego paying union dues.

Jabs appeared in TV commercials as an unofficial spokesman for the cause, and gave at least $20,000 to groups mobilizing support for the ballot issue.

ATP’s other early funders listed on the IRS document include New Leadership Colorado. The nonprofit also contributed to anti-union groups in 2008, and gave $45,000 to ATP.

Coloradans for Economic Growth and New Leadership Colorado are both listed as “delinquent” for failing to file annual reports with the Colorado secretary of state and have faded from public view. They were both registered in 2008 at Hackstaff Law of Denver, Colorado. The law firm’s address is the same one listed on ATP’s corporate registration.

Hackstaff is the former firm of Colorado Secretary of State Scott Gessler, who represented ATP in a lawsuit challenging campaign finance laws in the Colorado city of Longmont in 2009 before he won public office.

A third nonprofit, Virginia-based Conservative Action League gave $40,000 to ATP, and has given smaller grants to Montana’s right-to-work group, which until recently was headed by ATP’s LeFer.

LeFer said he’s a “consultant” to ATP, but documents obtained by PBS Frontline show that he wrote fundraising strategy memos to ATP staff under the title of “Director Strategic Programming.”

In a 2009 memo, LeFer writes that ATP’s fundraising program “was designed by the same people who designed the multimillion-dollar personal-visit style” strategy used by “Club for Growth, the National Right to Work Committee, and other pro-business / limited government interests.”

Thompson is a tea party supporter who lent his corporate jet to a group called Tea Party Patriots in 2010 for their “grassroots” tours, according to Mother Jones. He sold his small manufacturing company for $364 million in 2009, and now runs a diner and grocery store in Kalispell, Montana.

Asbjornson is the founder of AAON Inc., a heating and air conditioning company based in Tulsa, Oklahoma. He is from Montana and remains a major donor to Republican candidates in the state this year.

He gave $10,000 to the state Republican Party and $5,000 to Denny Rehberg’s US Senate bid. He gave a smaller amount to Steve Daines’ run for Montana’s lone US House seat.

He has also supported the tea party candidacy of Ted Cruz, the GOP’s nominee for US Senate from Texas. In 2010, he gave money to tea party-endorsed Sharron Angle’s unsuccessful bid for US Senate in Nevada.

A list of ATP’s targeted donors from 2009 obtained by Frontline includes representatives of oil, gas, and mining interests. It also lists Asbjornson as a “top priority” to return to after his 2008 contribution.

He is neck-and-neck in state polls with Republican Rick Hill, who supports right-to-work laws. Bullock says he would veto any such measure passed by the Legislature.

The Center for Public Integrity is a nonprofit, independent investigative news outlet. For more of its stories go here.