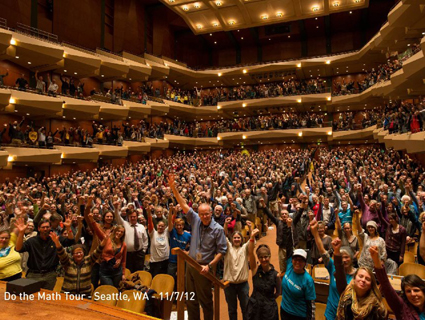 If there’s any good to come out of Hurricane Sandy, it could be that the storm provided a platform for several big-name politicians—Andrew Cuomo, Michael Bloomberg, and as of Tuesday night President Obama—to finally connect the dots between extreme weather and climate change. But although the polls show extreme weather to be a top motivator for getting folks interested in climate change, the challenge for activists is always how to convert short-term interest in a particular disaster into long-term awareness.

This week environmental activist and author Bill McKibben has set out to do just that, with a wide-ranging bus tour that seeks to use Sandy as fresh ammunition in an ongoing fusillade against Big Oil, principally by urging individuals, universities, and governments to divest from fossil fuel companies.

“I’m as hopeful as I’ve felt in 25 years of working on climate change,” McKibben said Thursday morning from his narrow bunk on the bus, barreling down the open road somewhere south of Tacoma, Wash., en route to a biofuel re-fueling station. He and seven organizers will live on the bus for the next month as it wends its way from the Bay Area to New York and back to Salt Lake City. “At least it feels now like we’re fighting back, and we’ve found the right people to fight back against.”

The tour has been in the works for some time, and was crafted as a vehicle for the statistics-based “Do The Math” campaign that has been McKibben’s primary shtick since his July article in Rolling Stone. Among the chief numbers:

The tour will also be a chance for green-minded policy wonks to start putting their heads together for the big challenges of a second Obama presidency, starting with what promises to be a heated re-launching of the fight against the Keystone XL pipeline, which the president will likely make a final call on in the coming months.

For now, McKibben wants to get as much mileage as possible out of Hurricane Sandy, which showed “there’s no way to escape climate change,” he said. “The most powerful island on earth was overwhelmed, and everyone knew it.”