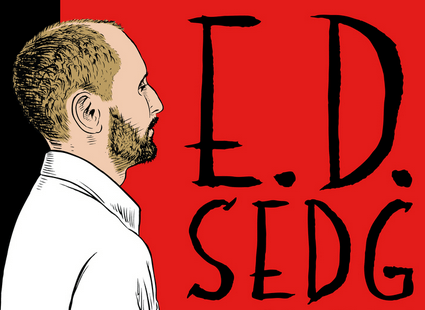 Full disclosure: I hate music reviews. I’m a musician, and something about distilling music into esoteric words from a Thesaurus makes me nauseous. It’s like taking your favorite song, scraping out the feeling, and replacing it with cold, slimy, sock vomit. That said, the Washington, DC-based dance-punkish band E.D. Sedgwick has a new album out that I’d like you to know about. So to solve my moral conundrum, I won’t tell you what to think. You can do that for yourself. I believe in you! Start by streaming the track, “It Wasn’t Me,” here, and listen as you read.

E.D. Sedgwick is the project of Justin Moyer, a musician and journalist for The Washington Post. (He doesn’t like writing music reviews, either.) Founded in 1999, it has in the past consisted mainly of just Moyer, with or without the backing of guest musicians. Now there are three other official members—Jess Matthews (drums), Kristina Buddenhagen (bass, vocals), and JosaFeen Wells (vocals)—giving the group a refreshing gender ratio amid today’s Indie-rock brodeo. The band releases its albums on Dischord, the seminal DIY label founded by DC punk legend Ian MacKaye, best known for his groundbreaking bands Minor Threat and Fugazi. Moyer has been involved with Dischord for more than a decade via both E.D. Sedgwick and his previous bands, El Guapo and Antelope.

Moyer tells Mother Jones that the latest album, We Wear White, is “the first record I’ve made with a specific group of people. It’s a document of our time together.” The band, which in the past has also been a one- or two-piece, went on a performing hiatus in 2001 when Justin was diagnosed with epilepsy and could no longer drive a tour van. But the project came back with a vengeance in 2004, when Moyer started performing as his transgender alter-ego Sedgwick—a Warhol scenester who OD’d on barbituates.

But he eventually grew “tired of wearing a dress all the time” and decided to give the band a fresh start.

“Everyone wants to change the name of their band every time they get a new drummer. I don’t really believe in that,” Moyer says. “It’s cool to stay connected with who you are, but move forward.”

E.D.’s lyrics have drifted away from the pages of People magazine and toward topics relevant to the here and now—retro-fetishism, gentrification, and why it was totally a mistake for you to get that DC flag tattoo. It includes Moyer’s first ever song about smoking marijuana (full disclosure: Justin Moyer has never smoked marijuana).

According The Washington City Paper‘s Joe Warminsky, the album shows that Moyer has “obviously been suppressing or subverting some serious rock tendencies during his time as a Dischord Records guy.” Bobby Power of Foxy Digitalis says the record “Mixes blue collar power pop of Ted Leo and scruffy DC post-punk of Q and Not U” and this is “yet another bizarre gem in Dischord’s crown.”

You can read some disparaging remarks in those reviews about hubris, schtick, kitsch and urban socioeconomics if you’re so inclined…or better yet, listen to the album yourself. It comes out on Tuesday and you can buy a copy here.

E.D. Sedgwick is kicking off a European tour on November 23, so if you’re in Berlin, Wroclaw, Hradec Kralov, or any of these cities, go check them out, whether your favorite record is Fugazi’s Steady Diet of Nothing or Kesha’s Animal. As the band signs its emails: “Thanks for your time. Good luck in life. PEACE BE UNTO YOU. Edie loves you.”

Correction: A previous version of this post included a Gif that incorrectly identified Moyer.