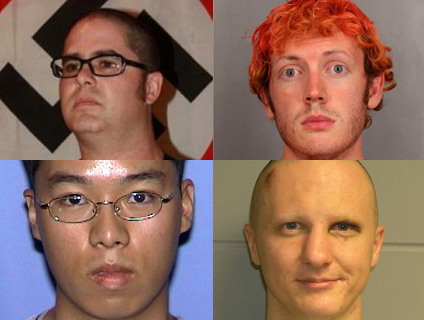 Editor’s note, December 14, 2012: This story on the prevalence of mental-health problems among mass shooters has new relevance in light of the Newtown tragedy. (It has been updated with data from the latest mass killing.)

Mass murderer Jared Loughner was sentenced on November 8 to multiple life terms in prison. It’s difficult to read an account of the court proceedings in Tucson without getting a lump in your throat. The man who shot 19 people at a shopping center in January 2011—gravely wounding former US congresswoman Gabby Giffords, and killing six including a federal judge and a 9-year-old girl—faced potent testimony from some of his victims.

“You may have put a bullet through her head, but you haven’t put a dent in her spirit and her commitment to make the world a better place,” said Giffords’ husband, Mark Kelly, as his still-recovering wife gazed directly at Loughner from her seat across the courtroom.

Loughner’s mental illness was a powerful undercurrent in the proceedings. “You tried to create for all of us a world as dark and evil as your own,” Kelly said. “But know this and remember it always: You failed.” He continued: “Your decision to commit cold-blooded mass murder also begs of us to look in the mirror…We are a people who can watch a young man like you spiral into murderous rampage without choosing to intervene before it is too late.” (Kelly then excoriated Arizona Governor Jan Brewer and other political leaders for cravenly ignoring gun control: “As a nation, we have repeatedly passed up the opportunity to address this issue. After Columbine, after Virginia Tech, after Tucson, and after Aurora, we have done nothing.” It’s well worth reading his entire statement.)

MoJo‘s map, timeline, and analysis of 30 years of mass shootings in America.

What had begun as a friendly public meeting hosted by Giffords on a mild southern Arizona morning turned ghastly when Loughner squeezed off 31 bullets in less than 30 seconds, wielding a 9 mm Glock with high-capacity magazines. For several years prior, Loughner had displayed signs of serious mental illness, including outbursts during his high school classes and complaints about voices in his head. Nevertheless, he was able to stroll into a Sportsmen’s Warehouse in Tucson and purchase a weapon and ammunition legally. One of the bystanders who helped subdue Loughner after he’d paused to reload was Patricia Maisch; as she told the court on Thursday: “That beautiful day, our mental-health system failed us.”

What few people realize is just how many times this has happened, before and since. Mass shootings generate sensational media coverage, yet most media have failed to connect the dots with regard to mental health. It is a crucial factor in these events, as our in-depth investigation into mass shootings at Mother Jones shows. After another young man unleashed horror inside a Colorado movie theater this July, we set out to track mass shootings in the United States over the last 30 years. We identified and analyzed 62 of them—25 in the last seven years alone.

Nearly 80 percent of the perpetrators in these 62 cases obtained their weapons legally. Acute paranoia, delusions, and depression were rampant among them, with at least 36 of the killers committing suicide on or near the scene. Seven others died in police shootouts they had little hope of surviving (a.k.a. “suicide by cop”). And according to additional research we completed recently, at least 38 of them displayed signs of possible mental health problems prior to the killings. (That data is now included in the interactive guide linked above.)

Loughner was medicated and underwent psychiatric examinations at a secure federal facility in Missouri for more than a year and was diagnosed with schizophrenia; by this August he was deemed competent to agree to a guilty plea, the terms of which bar him from any appeal or parole.

Could he or any of the others have been stopped in advance? It’s an exceptionally challenging question, one whose answer must take into account civil liberties, medical ethics, the proliferation of millions of guns in the United States, and our nation’s politically charged patchwork of ever-loosening gun laws. On November 1, I participated in a panel discussion at the Commonwealth Club of California, discussing the data from our investigation in an effort to help consider how we might begin to answer this question. “The Mind, Madness and Gun Violence” also featured Dr. Renée Binder, a leading expert on psychiatry and the law from UCSF Medical School; board member Carol Kingsley of the Law Center to Prevent Gun Violence; and Robert J. McMenomy, assistant special agent in charge of the San Francisco division of the FBI. You can watch our full discussion here: