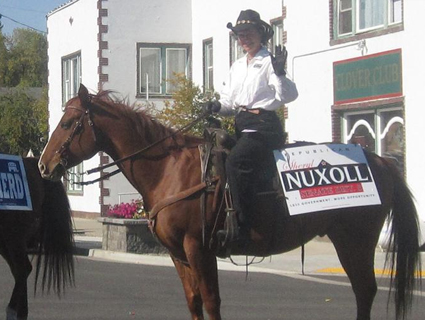 Courtesy of Nuxoll for Senate

Idaho state Sen. Sen. Sheryl Nuxoll (R) has found a daring plan to reverse the results of the November election and turn the keys to the Oval Office over to Mitt Romney: Boycott the Electoral College. Last Monday, Nuxoll, a Republican, blasted out a link on her Twitter feed to a new proposal from Tea Party Nation founder Judson Phillips, explaining that if 17 Romney states rejected the Electoral College, they could throw the outcome of the election to the GOP-controlled House of Representatives. As Phillips put it, referring to episodes in which Democratic lawmakers crossed state lines to avoid controversial votes, “Democrats have actually set this precedent of refusing to participate to deny Republicans a quorum. They did this in Wisconsin and in Texas. Why can’t we do this with the Electoral College?”

So is this possible? Has the key to a Romney presidency been hiding in plain sight all along?

Betsy Russell of the Spokane Spokesman-Review burst conservatives’ bubble, and snagged the quotes of the year:

Constitutional scholar David Adler, director of the Andrus Center for Public Policy at Boise State University, said the plan is not “totally constitutional,” as touted in the article, but is instead “a radical, revolutionary proposal that has no basis in federal law or the architecture of the Constitution.”

Adler called it “really a strange and bizarre fantasy.”